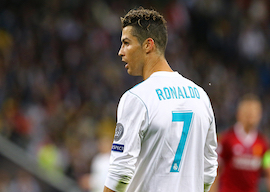 It says a lot about the vulgar character of our time that The New Republic would publish an article called “Why Has the World Gone Easy on Cristiano Ronaldo?” The soccer star is under investigation for an alleged rape in the U.S., but Ronaldo hasn’t been charged with a crime, and for all we know, he’s innocent. After all, false rape accusations are five times more common than false accusations of other types of crimes. It’s also possible, of course, that Ronaldo is guilty, that he did rape his accuser Kathryn Mayorga, but like many powerful men, used his wealth and stature to get away with it, so far.

In any event, people simply don’t know what happened, so Jacob Stern and David Yaffe-Bellany certainly aren’t justified to basically call for Ronaldo to be denounced by his fans, sponsors, and the world generally. Consider their extraordinary title, with its odious moral smugness. Do we really want to live in a world where it’s taken for granted that a mere accusation is grounds for “the world” to “go hard” on Ronaldo (or anyone else)?

When it comes to sexual assault allegations, as in other areas, there is a deep (albeit largely unconscious) bias in favor of women, the physically weaker and biologically more valuable sex, so it’s crucial for these cases to be investigated with objectivity and rigor. Sheer paternalism, however well intended, must not render anyone guilty. For the same reasons, politically correct ideologues like Stern and Yaffe-Bellany should mind their business instead of advocating for “moral action” when it’s not warranted.

Political correctness purports to realize fairness and to correct past injustices, but in practice, it amounts to a power grab and envious demands for revenge (a.k.a. “social justice”) as determined by group interests. Its chief characteristic is a loony touchiness, and here sports is no exception. Thus, LeBron James has been widely criticized in recent weeks for posting supposedly anti-Semitic rap lyrics on his Instagram account. Taken from the song “ASMR” by 21 Savage, the lyrics run: “We been gettin’ that Jewish money. Everything is Kosher.” Although the indignant reactions were hardly surprising, they were nonetheless silly. Stereotypes easily lend themselves to crass caricatures, it’s true, and yet stereotypes are often accurate, a subject on which there’s ample data. 21 Savage brags about his vast wealth, which he tells us is “Jewish money.” For as the stereotype accurately reflects, as human groups go, Jews are disproportionately wealthy. (Hence it happened that, when Rep. Alexandria Ocasio-Cortez said that she’s Jewish, Jews themselves were incredulous: “If she were really one of us, she’d be able to afford to live in D.C.!”) The boast is succeeded by the metaphor “Everything is Kosher.” While the lyrics are linguistically crude, they aren’t obviously anti-Semitic. With its rudimentary and undeveloped figurations, rap is a kind of lesser poetry, and 21 Savage’s lyrics are an example of how the craft works.

No matter. In general, human judgment is obtuse, and so James received the standard mindless media drubbing. Just as predictably, he apologized, explaining that he didn’t mean to offend anyone. Given how politically correct the NBA has become, I’d expected James to be fined or to receive some other dumb punishment—say, to have to read a year’s worth of John Podhoretz’s or Jonah Goldberg’s hysterical ravings. After all, this is the league that made Donald Sterling lose his ownership of the Los Angeles Clippers because of his private racist remarks. The NBA also banned him for life.

In his wonderful 1994 book, The Western Canon: The Books and School of the Ages, the scholar-critic Harold Bloom, in disgust with the decline of his profession, wrote in his mordant vein:

I still remember my shock, thirty-five years or so back, when I was first taken to a soccer match in Jerusalem where the Sephardi spectators were cheering for the visiting Haifa squad, it being of the political right, while the Jerusalem squad was affiliated with the labor party. Why stop with politicizing the study of literature? Let us replace sports writers with political pundits as a first step toward reorganizing baseball, with the Republican League meeting the Democratic League in the World Series. That would give us a form of baseball into which we could not escape for pastoral relief, as we do now. The political responsibilities of the baseball player would be just as appropriate, no more, no less, than the now-trumpeted political responsibilities of the literary critic.

“People tend to be profoundly irrational and conformist whenever mankind’s precious rights are involved.”

Twenty-five years later, “the political responsibilities” of athletes, coaches, and others in the sports world seem to be givens. It’s not just that we increasingly encounter the irrelevant (and usually ignorant) political opinions of persons in contexts from which we desire “pastoral relief.” Besides that nuisance, the sports themselves are being ruined by political correctness. For the second consecutive year, Mack Beggs, an 18-year-old transgender wrestler, has won the Texas girls’ Class 6A 110-pound division. Born a female, Beggs is in the process of transitioning to a male, or so she thinks. Beggs, who takes a low dose of testosterone, had wanted to compete against boys, but Texas public high schools, which have yet to get with the progressive times, require athletes to compete under the gender on their birth certificate. Last year two girls, not wanting to risk being injured by her, forfeited against Beggs. So did a girl this year. Whether they were compelled to undergo empathy training I don’t know. When I lived in Texas, I was delighted to meet women who down Jack Daniel’s like water, but it seems “The Lone Star State” still has a long way to go as regards gender equality.

Transgenderism is a problem in the Olympics, too. Per the latest rules, transgender “women” must test below a specified level of testosterone for more than one year in order to compete. But while this is doubtless somewhat effective, aren’t these athletes, with their still bigger, still stronger, and still more durable bodies, out of place even so?

This issue is important because in 2020, for the first time, the Olympics may have transgender competitors. Furthermore, there are many transgender activists who insist that testosterone testing is “discriminatory,” that it’s “a human rights issue.” People tend to be profoundly irrational and conformist whenever mankind’s precious rights are involved, so it’s not unlikely that, sooner or later, the Olympics will yield to transgender activist pressure, eventually becoming quite grotesque and full of herd cant, like the Women’s Studies seminars at your local college.

Last year, I read several articles in Sports Illustrated calling for women to become head coaches in the NBA. Surely this is not desirable. More than the other major team sports, the NBA is a players’ league, nor has it ever been so difficult for coaches to coach and get players’ respect. Indeed, old-school, no-nonsense coaches such as Gregg Popovich and Tom Thibodeau, who do both exceptionally well, are already on the way out, as millennials just don’t know how to deal with these sorts of men.

NBA coaches are commonly former NBA players, or men who played in college. They have a longtime connection to the league. Most people today seem to take it for granted that everyone deserves respect, but this is historically new and a rather sentimental, feminine notion. It’s not how men actually work, and if there’s any group of men who still make you earn their respect, it’s professional athletes. Although several NBA players have endorsed the idea of women coaches, it’s hard to see women guiding and keeping a group of arrogant, highly competitive, and testy men in line. You may think this skepticism is prejudiced, and you’d be right, though, like many stereotypes, it’s a truthful prejudice: a judgment based on prior knowledge of how the sexes function. What has any woman coach ever done to earn the respect of a huge ego and prickly personality like Kobe Bryant? A stellar career in the WNBA? A master’s degree in sports psychology or sports management? Ah, that’s funny!

The truth is that, as in the military, women in leadership positions won’t be taken seriously in men’s sports, and rightly so. Like women themselves, men don’t want to answer to women, especially in a very masculine environment. It’s different with a figure such as Phil Jackson, who, for all their clashes, still coached Bryant to five NBA championships in an 11-year run with the Los Angeles Lakers (1999–2010). Although he was never an all-star player, let alone of hall-of-fame caliber, Jackson, a tough and highly skilled defender, was a vital reserve on the New York Knicks team that won the championship in 1973. Like Jackson’s superb stint coaching the Chicago Bulls in the 1990s, that sort of achievement matters to a man like Bryant, whose respect is not easily earned, and for good reason.

The view that women deserve to coach NBA players is so absurd that one shouldn’t have to refute it. Nobody deserves anything because of his or her gender, and neither in sports nor in any other domain do women have any business telling an all-male group what to do. The dreadful leveling and harm done to boys and young men in what now passes for education, from secondary schools up to our universities, furnish grim proof of what is sure to happen whenever women are put in charge of groups of men.