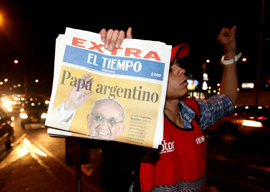 “The Faith is Europe. And Europe is the Faith,” wrote Hilaire Belloc after that bloodbath we call World War I. “Either Europe will return to the Faith or she will perish.”

“The bad work begun at the Reformation is bearing its final fruit in the dissolution of our ancient doctrines—the very structure of society is dissolving.” He was right. Europe is the dying continent.

And looking back at the history of the Old Continent, we see the truth of G.K. Chesterton’s insight: When men cease to believe in God, they do not then believe in nothing, they will believe in anything.

“That the media showed visible disappointment at learning this makes one wonder if they know anything at all about the Catholic Church.”

Consider the idols to which European Man has burnt incense since losing his faith: Darwinism, Marxism, Bolshevism, fascism, Nazism, now globalism—the idea of a secular paradise where mankind’s needs are met by the state and people spend their lives consuming cultural and material goods until the time comes for the painless exit.

Wednesday, even as Europe has said goodbye to Rome, Rome began to say goodbye to Europe, where the fastest growing faith is manifest in the mosques rising from Moscow to Madrid.

The College of Cardinals, for the first time ever, chose a pope from the New World: Cardinal Jorge Bergoglio of Argentina.

To be exact, Pope Francis is not of the indigenous peoples of the New World. His father was an immigrant from Italy who came to Argentina before he was born. Yet, though by blood an Italian, Pope Francis, heart and soul, does not belong to Europe.

The reaction of our secular media to the election of this first Jesuit pope, who lives his “preferential option for the poor,” was easily predictable.

On redistribution—“Is he a conservative, or a Great Society liberal who will push the ‘social gospel’?”—the new pope passes with honors. He has a simple apartment, rides the bus and lives among the Buenos Aires poor.

But on the “social issues”—“Is Pope Francis a progressive who will move the Church to a more ‘tolerant’ view of abortion and same-sex marriage?”—the disappointment of the media elite was evident.

Pope Francis adheres to orthodox Catholic teaching that abortion is the killing of an unborn child entailing automatic excommunication for all involved. He has denounced same-sex marriage and regards homosexual adoptions as a crime against children.

That the media showed visible disappointment at learning this makes one wonder if they know anything at all about the Catholic Church.

To be Catholic is to be orthodox.