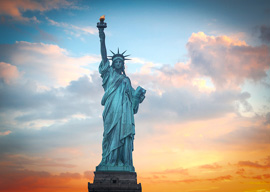 Responding to our moving NATO troops into Estonia, Latvia, Lithuania and Poland, Putin has begun a buildup of nuclear-capable offensive and defensive missiles in Kaliningrad, its enclave between Poland and Lithuania.

Should we get into a confrontation with the Russians in the Eastern Baltic, how many of our NATO allies, some now openly pro-Putin, would stand beside us?

The point: Not only is the Cold War over, the post-Cold War is over. We are living in a changed and changing world. Regimes are falling. Old parties are dying, new parties rising. Old allegiances are fraying, and old allies drifting away.

Yet U.S. policy seems set in concrete by war guarantees and treaty commitments dating back to the time of Truman and Stalin and Ike and John Foster Dulles.

America emerged from the Cold War, a quarter century ago, as the sole superpower. Yet, it seems clear that we are not today so dominant a nation as we were in 1989 and 1991.

We have great rivals and adversaries. We are deeper in debt. We are more divided. We’ve fought wars in Afghanistan, Iraq, Syria, Libya, Yemen that availed us nothing. What we had, we kicked away.

America is at a plastic moment in history.

And America needs nothing so much as reflective thought about a quarter century of failures—and fresh thinking about her future.