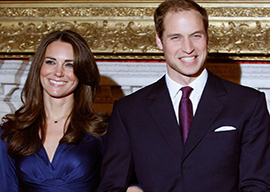 Huzzah! We finally have a royal engagement. After eight agonizing years, Prince William proposed to Kate Middleton, who we”re now obliged to call “Catherine” instead of “Waity Katie.” The world learned of the pending nuptials on Tuesday, yet the proposal took place last month at a rustic hut while they vacationed together in Kenya. After a very happy stay, the couple signed the guestbook “Such fun to be back!” and thanks for the “wonderful 24 hours.” The Prince proposed with his mother Princess Diana’s gorgeous 18-carat sapphire and diamond ring and said it was his way of “keeping her close to it all.”

Later on Tuesday, the lovebirds gave their first official interview, during which Catherine said of Will: “There’s a true romantic in there. I really didn”t expect it. It was a total shock…and very exciting.” The reaction from Brits”beyond a sigh of relief and the expected jubilation”was slightly tinged with skepticism. Many are wondering just how lavish the wedding will be, especially since the UK is being battered in the public service sector. Some are also noting that Catherine isn”t royalty, but rather comes from a middle-class (although still wealthy) background. Still others are drawing comparisons between the late Princess Di and William’s new fiancÃ©e, noting the “regal resemblance” between the two”and some fashion similarities (although, both of them wearing red jackets and black hats doesn”t actually mean they have the same style). Now all the speculation is being channeled towards the wedding: who will design the dress? Who’s on the invite list? Time will tell.

Perhaps Prince Charles was jealous of all the attention his son was receiving. He made news on Friday by saying when he takes the throne his wife Camilla “could be” made Queen”and not Princess Consort, as he’s previously suggested. His aides are saying there’s “no change” in the plan for her official title, and that the Prince was merely caught off guard when Brian Williams asked him the question. But a slip of the tongue usually reveals the truth, no?

Stepping away from the royals for a bit, America’s sort-of-not-really golden couple, Julianne Hough, 22, and Ryan Seacrest, 35, seem happier than ever. The young country star spoke out to Ellen for the first time about her long-term boyfriend. “Oh my gosh, he’s phenomenal,” she said breathlessly. “He’s really romantic. He’s not even in town, and I got in my car and there are flowers everywhere.” How darling. 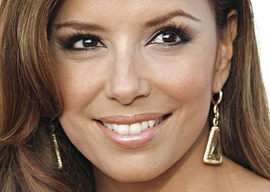 With another week comes another high-profile break-up. Desperate Housewives” Eva Longoria and NBA star Tony Parker have split after three years of marriage. Eva’s said to be “devastated,” yet she’s the one who initiated the divorce proceedings. Which usually means one thing: cheating! The alleged other woman is Erin Barry, wife of Tony’s former fellow San Antonio Spurs player Brent Barry. (The Barrys are also going through a divorce.) Eva’s good friend Mario Lopez sparked more cheating rumors by saying she found “hundreds of incriminating text messages” with another woman. Here’s hoping this is one Housewife who can quickly move onwards and upwards.