Prisoners of the New Order 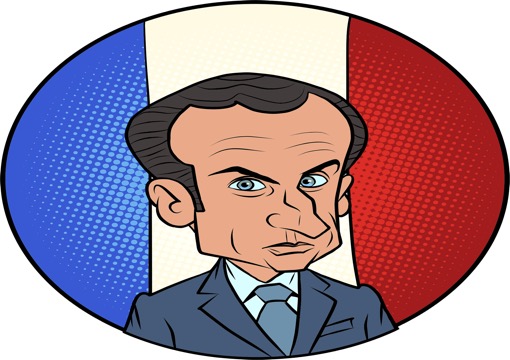 “I am not for bothering the French. I rant all day at the administration when it blocks them. Well, there, the unvaccinated, I really want to hassle them. And so, we will continue to do it, until the end,” said the president of France, Emmanuel Macron, in an interview about his Covid policies. This outraged the French, but with so many outrageous things happening every day, it was lost in the turbulence.

It was, however, an important admission. Macron makes it clear that as far as he is concerned, the unvaccinated are something other than citizens who have rights and protections as conventionally understood. Since noncitizens now have rights in a modern Western society, this means the people Macron is hassling are some new category of person or possibly not even people at all.

While it may sound a bit weird—the leader of a country that prides itself on “Liberty, Equality, Fraternity” boasting about tormenting the citizens—it is perfectly rational in the context of the evolving nature of Western societies. As the definition of the state has evolved with liberal democracy, the people’s relationship to those in charge of their societies is changing along with it.

“It turns out that people who like exercising absolute control over others tend to be sociopaths.”

In the old liberal order, a citizen was someone who could participate in the running of his government, either through voting or holding office. Initially, there were active and passive citizens, but both enjoyed the same rights and protections. The difference was the active citizen could vote and hold office, while the passive citizen was prohibited from those activities, until he met certain criteria, like owning property.

The foundation of the liberal order was the individual. It was assumed that it was impossible to have a civil society without respecting the individual, as it was individual labor that made society possible. Consensual government is rooted in the belief that collectively, individuals will rule themselves in such a way that the largest number of citizens will enjoy the maximum benefit of society.

The new order is something different. As managerialism has slowly displaced the old liberal idea of government, the administrative state has slowly taken control of the relationship between the citizen and his government. The bureaucrats running the vast administrative state now make the rules and enforce them. The political class is a vestigial adornment to provide the veneer of legitimacy.

Covid has brought this change to the fore, but the pandemic is not a cause; rather, it’s an accelerant to trends dating to the last century. The first obvious example of the new arrangements ushered in by managerialism was the basic definition of what it means to be a citizen of a nation. Without anyone noticing, a citizen went from being someone born into a country to someone who happens to be in the country.

The French ethnicity, for example, stopped being people who are actually French, in the biological sense of it, and became anyone who happens to be in France and is under the control of the French bureaucracy. This is why borders no longer matter. From the perspective of the administrative state, there are those over whom they have control and then everyone else, so the borders are meaningless.

The panic over the Covid pandemic has been a great leap forward in this transformation of Western societies. There are those under the care, custody, and control of the administrative state and then there are those who are noncompliant. This is more than just a tick on an official form. It is a moral designation. This is why Macron brags about attacking the noncompliant. They deserve to be hassled.

This is not just a Covid phenomenon. The vaccine passports and other control mechanisms are part of the evolution of the administrative state. In the United States, people who fall outside of acceptable discourse are denied access to internet services and the financial system. Corporate actors are free to attack ordinary people because those people are outside the new moral order as defined by the administrative state.

It is not hard to see where this will lead. Soon, fidelity to Gaia will bring a new set of rules the compliant must accept. The climate deniers will not be allowed to buy produce until they pass a climate-change course. If you used the wrong pronoun in a Zoom meeting, your company can not only fire you, but report you to the appropriate agency, forcing you into a rehabilitation center for the gender-noncompliant.

It sounds ridiculous, but look at what is happening in corporate America. Citi has announced it will terminate thousands of employees for not being vaccinated for a virus that is essentially harmless now. In other words, it is not about public health, but about obeying the rules. The corporate class makes medical decisions for its staff, because they are part of the vast administrative state now. That means their employees are under their care, custody, and control.

The radicalism of this new paradigm cannot be underestimated. The West is now in the midst of a great transformation. The old liberal order of respect for the individual rights of the citizens as things they possess by nature of being alive is now giving way to a custodial order. In the old order, you were responsible for you. In the new managerial order, the administrative state is responsible for you.

Prisons, of course, work similarly. Those who follow the rules are rewarded with extra benefits like additional commissary or access to the library. Those who are noncompliant are punished. As we are seeing with the administrative state’s response to Covid, the system rests on the utilitarian belief that people are motivated by the desire for pleasure and the avoidance of pain.

Like the fog, this new civil arrangement has crept up on the West. Even the fiercest critics of the modern ruling class have barely noticed the change. That suggests reversing it is unlikely, barring catastrophe. The Covid years suggest the people will tolerate it as long as their bellies are full and their entertainments keep coming. Unless and until the inmates take over the prison, the West is now a custodial state.