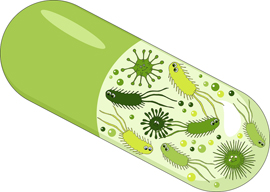 NEW YORK—Is probiotic a real word or did somebody make that up just to be a smart-ass?

I mean, antibiotics I understand—pesticides for the body, they slide down your throat and napalm anything in sight until every germ is exterminated.

But when did everybody and his ugly sister start popping probiotics every day like they know what that stuff is?

You ever read the ingredients on a box of probiotic capsules? Men have died trying to lift those words. Admit it, you have no idea what fermented Streptococcus thermophilus is, but you will ingest it in spite of it sounding like a Greek social disease.

If everybody needs probiotics, why had I never even heard the word until about ten years ago? Why do we have 97,000 probiotic foods and medicines for sale when apparently we didn’t need these products during any of the previous 10,000 years of civilization?

And yeah, I get it, I’ve heard the explanations. “Your body needs germs, Joe Bob. Probiotics are microorganisms—friendly germs. One reason Americans are so sick is that we don’t have enough bacteria in our systems.”

“Our children don’t play in the dirt enough, Joe Bob, they don’t get dirt bacteria into their systems. Chinese children get down in the mud with shovels. And Russian children, they’ve got dirt under every fingernail and their pores are filthy. That’s why we’re falling behind. Our children are too clean.”

And yet you want me to think you’re not insane.

If you go to the internet and search under “How did this probiotic thing get started?” you get the name Elie Metchnikoff.

Elie Metchnikoff was a Russian scientist who noticed, in the year 1907, that yogurt-drinking Bulgarian peasants live longer than everybody else.

Okay, I don’t pretend to be an expert on Slavic goat farmers in sheepskin hats, but how did Elie know it was the yogurt? Maybe the Bulgarian peasants were also scrubbing their bodies with peat moss and slathering poison mushroom fungus over skin reddened from birch-bark flogging. After all, they still do that stuff in Coney Island hothouses, so I have to assume that the yeomen of Old Plovdiv had all kinds of gross body rituals.

Because let’s start with that—the grossness.

“You have no idea what fermented streptococcus thermophilus is, but you will ingest it in spite of it sounding like a Greek social disease.”

Everything probiotic starts with fermentation.

And what is fermentation?

You put leftovers in a jar, leave the jar in a ditch, then check it once a week to see how much acid, gas, foam, slime, and green outer-space bubbles have formed on the surface of it, and then you drink it.

Gross. I can see why peasants were into it, because (a) time on their hands, (b) they never throw away food, and (c) they don’t think in hours, they think in seasons, as in, “I wonder what’ll happen if I pour some calf milk into a bag made out of a sheep intestine and dump some wild boysenberries in there and just leave it nailed to this tree until spring?”

Fast-forward a hundred years and gay bodybuilders in Miami Beach are sampling probiotic dairy concoctions to try to get that perfect mix of little micro-monsters that live inside your large intestine and eat stuff.

“I’ve got kombucha with 300 million living organisms inside it, and I down three of those before every workout. That’s almost a billion active cultures invading my gut.”

“Yeah, but all that stuff is Lactobacillus. I’ve got pure Bifidobacterium in a 60-gram power bar that stays active past the stomach acids all the way to the scrotum.”

I mean, people are actually having these conversations.

I really think that someday very soon we’re gonna discover a professional bicycle racer split in half on the side of the road, his purple Spandex body stocking littered with intestinal organs that have exploded due to some probiotic power drink imported from Norway.

His fellow racers from Team Quadriceps, based in Salem, Oregon, will gather around their disemboweled comrade and say, “He shouldn’t have taken that last KeVita out of the fridge.”

Now. Knowledgeable probiotic gut-swill consumers will instantly recognize the brand name KeVita as the most massively concentrated army of live stomach creatures that can be forced into a single bottle. The following is a true story:

I was staying at a friend’s house, and just before I left for my journey, I opened the door of his refrigerator and saw what I mistakenly believed to be some kind of morning fruit juice. I screwed off the plastic cap, guzzled a third of the bottle, and was a little perplexed by the fizzy eye-popping buzz that filtered down through my sinuses and made it impossible to take a second drink. I replaced the cap and stuck it in an outside pocket of my backpack.

Four hours later, climbing out of a taxi at the Drake Hotel in Chicago, the glass bottle with the fizzy stuff inside exploded, shattered into a thousand pieces, frightened the bell staff and quite a few pedestrians, and left so much glass on the street that even the doorman admitted, “That’s one I’ve never seen before.” I gave him two twenties—it was that bad. I’m surprised nobody called the bomb squad.

My presumed “fruit juice” was, in fact, a bottle of KeVita Sparkling Probiotic Drink, which is described in their advertising materials as a “fermented proprietary kefir culture.”

Quick digression: Kefir, which comes from the Caucasus Mountains and is favored by Chechen terrorists living in caves, is a sort of super-probiotic drink that features calf milk, goat milk, grains, and stuff that only 107-year-old grandmas know about, and it’s basically for people who want to mainline yogurt. Supermodels in Aspen consume it by the gallon.

The particular type of “water kefir culture” that I had gulped contained “billions of live probiotics”—not millions, not hundreds of millions, but billions—and had been “naturally flavored” into a Mojita Lime Mint Coconut cocktail. (You think I’m making this up, but I have pictures.)