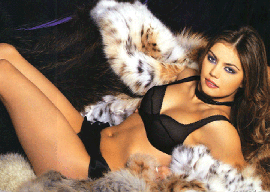 Nothing says “secret mistress” quite like posing for a nationally renowned magazine. Vladimir Putin’s alleged girlfriend graces the cover of Russian Vogue this month in a $33,000 gold-encrusted Balmain dress. The Russian Prime Minister has long denied an association with Alina Kabayeva, a 27-year-old former Olympic gymnast”and gold medal winner”who met Putin when she was just 17. Mysterious! Adding fuel to the fire: she had a son last year but won”t discuss who the father is. Now everyone is getting a splashy introduction to the long-tressed beauty in the January 2011 issue.

Elsewhere in the fashion world, Carine Roitfeld set tongues wagging after announcing Friday she is stepping down as the editor of French Vogue. The fashion maven headed up the magazine for a decade and now wants to pursue “personal projects” but claims to have no set plans. She’s long been rumored to be the heiress to the American Vogue when Anna Wintour cedes control, which will be, we”re guessing, never.

As is typical for this time of year, holiday break-ups abound. The latest to say “I don”t” are Elizabeth Hurley and husband of three years, Arun Nayar. After a tabloid ran photos of her overnight trip at an Australian cricket player’s house, Hurley was forced to do a “walk of shame” tweet, saying, “Our close family and friends were aware of [our split].” They probably weren”t aware of the new boyfriend, but that’s what News of the World is for.

In TV land, Dexter stars Michael C. Hall and Jennifer Carpenter have split after less than two years of marriage. Poor Julia Stiles, a guest star on the Showtime hit this year, was thrust into the spotlight and said to be the cause of the separation. Stiles responded: “I have absolutely nothing to do with the split….This is a personal matter between them, and we should respect their privacy.” Still, thank god she’s not returning next season. That’s going to be an awkward work environment. 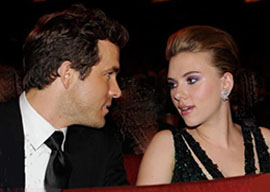 And the Most Beautiful Couple of Our Time has also called it quits. Ryan Reynolds, this year’s Sexiest Man Alive, and Scarlett Johansson pulled the plug on their relatively young marriage”they lasted two years. While sources say there was no cheating involved, that it was their skyrocketing careers that thrust them apart, isn”t it the case there’s always someone else involved? ScarJo is recuperating at a spa in Jamaica, while Reynolds is busy filming in Atlanta.

At least someone is finding love during the snowy season. Designer Marc Jacobs is seeing someone, but don”t try to get him to talk about it. When asked about high profile ex Lorenzo Martone, Jacobs said “I don”t speak about that. I have someone new in my life. Everything’s fine.” Recently, he’s been spotted solo and au naturel in racy ads for Bang, his new perfume.

Hallelujah, Aretha Franklin seems to be on the up-and-up. The Queen of Soul underwent surgery earlier this month and is resting at home. “This is Aretha time to do whatever it is I need to do,” she said. The “get well soon” cards from Oprah, Steve Wonder, Patti LaBelle and others surely helped, too.

Alert, alert! President Obama will not be invited to Prince William and Kate Middleton’s wedding, or so says one report. Because it’s not a “state occasion” and the prince is not the next heir to the throne, the couple is declining to invite some heads of state, despite a bloated 2,000-strong guest list. French President Nicolas Sarkozy and wife Carla Bruni are likely to be invited, so the glam factor will still be high. And don”t expect the Obamas absence to tame the media frenzy at all.

This is what Usher gets from trying to put the moves on someone in public. During a concert this week in New York, Usher brought an overeager fan onstage and serenaded her for five minutes, then she repaid him by accidentally kicking him in the face with her stiletto. His response? “We play rough in the bedroom.” At least the unlucky fan will always be able to remember her big embarrassing moment in the spotlight on YouTube. 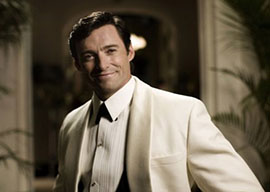 Film stars weren”t safe either this week. Daredevil Hugh Jackman tried to make a grand entrance on one of two special Australia-shot episodes of Oprah. A zip line was supposed to take him gracefully to the stage, but all the excitement of the venue caused him to brake too late and he ran into some lighting. His handsome mug was tarnished with a black eye.