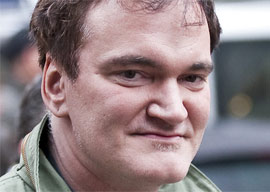 So it is with great joy that I’ve been observing Tarantino being tethered to the millstone that’s dragging Harvey Weinstein down to the ocean floor. When the “badass” women of Weinstein’s films finally started standing up for themselves and calling him a corpulent, power-drunk sex offender, Tarantino distanced himself from Weinstein ever-so-slightly, admitting there were a few things that he’d sort of, you know, heard about but didn’t do anything to rectify, but you can rest assured that he’s a different man now and if he’d heard the same rumors these days he’d be raising a Black Power fist and calling for Weinstein’s castration.

And it was even with more joy that I greeted the news that Uma Thurman recently claimed that Tarantino sadistically set up a film scene that permanently damaged her neck and knees.

Upping my Schadenfreudian euphoria to the danger zone was last week’s news that in 2003, Tarantino effectively legitimized pedophilia by claiming on the Howard Stern show that a 13-year-girl was totally “down” with being drugged and sodomized by Roman Polanski:

He didn’t rape a 13-year-old. It was statutory rape. That’s not quite the same thing. It’s statutory rape, he had sex with a minor, that’s not rape. To me, when you use the word ‘rape’ alright you’re talking about violent, throwing them down. It’s like one of the most violent crimes in the world….Throwing the word ‘rape’ around is like throwing the word ‘racist’ around. It just doesn’t apply to everything that people use it for. He was guilty of having sex with a minor…. She wanted to have it and dated the guy….Look, she was down with this.

Realizing that his career was possibly set to be immolated, Tarantino offered a limp apology for his “cavalier” and “insensitive” remarks that he’d made merely “for the sake of being provocative.”

And that’s the perfect distillation of Tarantino—not only does he do things merely “for the sake of being provocative,” nearly everything he does is completely safe. One risks nothing by saying that white blood needs to be spilled and that Nazis and slavery were bad. In fact, that’s the only way one gets a media career these days. The truly radical ideas are entirely verboten.

And he clearly doesn’t have the street smarts to understand what Donald Trump grasps intuitively—apologizing only makes you look weak. In other words, it makes you look like Quentin Tarantino.