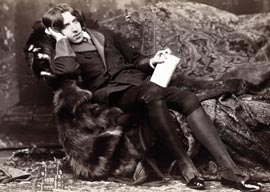 Oh, Gibbon: now there was a quotable guy. Everyone knows his observation about Roman religion:

“The various modes of worship that prevailed in the Roman world were all considered by the people as equally true; by the philosophers as equally false; and by the magistrate as equally useful.”

That’s merely the tip of a quoteberg, though. The Decline and Fall is full of memorable sentences. Not all of them are wisdom-quotes; some are just quips, but memorable anyway:

“I remember reading somewhere the confessions of a Benedictine abbot: my vow of poverty has brought me an income of an hundred thousand crowns a year; my vow of obedience has brought me the power of a sovereign prince. I forget the consequence of his vow of chastity.”

I”m surprised that Gibbon isn”t among the small, select company of quote-attractors: famous persons who draw in the attribution of stray quotes like black holes sucking in passing stars.  Johnson, Mark Twain, George Bernard Shaw, and Winston Churchill are the big gravitational sinks here, each with far more quotes attributed to him than he could possibly have generated.

Speaking of the last-named there: I”d like you to take note that I have, throughout this piece, in proper reactionary fashion, referred to the generic human using the masculine gender* (“he,” “guy”) on the grammatical principle that the male embraces the female. I spit on the fools who want me to alternate “he” and “she,” or default to a clumsy plural “their,” or sink to monstrosities like “s/he.” Feugh!

Well, somewhere recently”I think it was on this very site”I attributed that principle to Churchill, to scorn from readers. It is of course much older.

“Always wind up your watch and verify your quotations””the Earl of Rosebery.

*Amo, amas, I love a lass, / As a cedar tall and slender;  / Sweet cowslip’s grace / Is her nominative case, / And she’s of the feminine gender.””John O”Keeffe