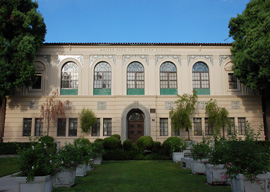 Walter Reed’s principal, Jeanne Gamba, told L.A. School Report that all it would take is for fifty white families to change their racial classification to minority, and Walter Reed can have its PHBAO privileges restored. “We have to be delicate in approaching this issue with families as they re-examine their self-identifications,” Gamba added. Reed officials are optimistic:

Reed’s parent center coordinator, Carol Convey, said she already knows of more than a dozen parents who have purposefully misidentified their status and will now change it to be a minority. Many parents and the principal said they believe that Reed will be a PHBAO school again next year.

And the LAUSD? School district official Keith Abrahams told Walter Reed parents that if they want to change their racial designation, they have that right. “You have an opportunity to self-select, we can’t tell you what race or ethnicity you are.”

School board member Scott Schmerelson disagrees with the racial-swapping plan. He thinks a better solution would be to require parents to report their race accurately, and then the school would “scrub the data” so Trump and his Nazis can’t access it to create their roundup list. Absolutely brilliant! Follow along with Schmerelson’s logic: (1) Create a racial quota system that determines school funding; (2) Force parents to classify their children accurately; (3) Collect the data; (4) Erase it and never speak of it again.

These are the rocket scientists in charge of education here in L.A.

Principal Gamba assured L.A. School Report that she will be “spending the rest of the year going through each family’s racial status to see if she can find families that listed themselves as white either out of fear or the assumption that it would help their child get into certain programs.” That way, as the white parents become minorities, the Mexican parents who pretended to be white can be tracked down and stopped. Because the best way to fight “Nazis” is to force people to report their race to government officials, and then have those same officials ruthlessly scrutinize the list to expose and root out people of color who are passing as white. To today’s left, that’s considered anti-Nazism!

White parents posing as minorities, school principals investigating Mexican parents to stop them from claiming to be white…and yet somehow it’s Betsy DeVos and school choice advocates who are the “racists.”

It should be noted that none of the involved parties have shown any concern for how their lunacy is affecting white students at Walter Reed. Leftist crybabies are always self-righteously asking, “How can I explain this to my children?” when it comes to stories of real or imagined racism. “A white man coughed in my direction at Starbucks today; how can I explain to my black child that such evil racism still exists?” I wonder how the white kids at Walter Reed are reacting to the fact that they are so unwanted, their parents are telling them to pretend to be a different race. I’m assuming that’s gotta hurt. But I wouldn’t know; I went to high school in the days before being mentally retarded became a required condition for holding a job as an L.A. school administrator or district official.

Every joke needs a punch line, and the punch line to this story is just too damn good. Over the summer, as part of a publicity stunt for her charitable foundation, singer Lady Gaga surprised students at Walter Reed with an unannounced visit. The name of Gaga’s charity? The same as the title of one of her biggest hits: “Born This Way.” Yes, the pop star whose mantra is “born this way” staged a photo op at a school where parents and students feel compelled to deny the way they were born.

Not even the most masterful writer of satire could have concocted a comedy this perfect.