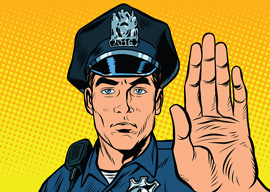 Twelve years ago, when actor Michael Richards launched into his epithet-laced tirade against a loud table of black revelers at the Hollywood Laugh Factory, the line that stood out to me as the most jarring was, ironically, the only one in which the former Seinfeld star didn’t say “nigger”: “Fifty years ago we’d have had you upside down with a fucking fork up your ass!” It was an homage to a time when blacks could not show disrespect to a white person. Even if a white guy was indeed doing something wrong, if a black man corrected him, that could be cause enough for a beating (or worse).

Human nature being what it is, it must have been amazing to live in a country in which you were immune to criticism or correction from millions of your fellow citizens. In the early part of the 20th century, blacks constituted a majority of the population in Mississippi and South Carolina. Can you imagine being able to stride through your state knowing that over half of your fellow residents live in abject fear of offending you?

How many of us would turn down that kind of power?

Michael Richards was clearly in the wrong that night in 2006. If you don’t like loud audience members, don’t play clubs that force two-drink minimums on patrons (or, you could be like me and avoid comedy clubs entirely—shit, I’d rather face an Einsatzgruppen firing squad than have to sit through a night of stand-up). The black customers were shouting so that the waitress could hear their mandatory drink orders, and “Kramer’s” concentration got thrown. But he was right about one thing: Fifty years ago, it wouldn’t have mattered that the blacks were just following the rules. Richards absolutely could have exacted revenge for his humiliation.

That’s the magic of racial immunity…which is why I don’t blame blacks for seeking it today. It’s an understandable desire. Not a healthy one, but understandable. This desire is currently manifesting itself in a campaign on the part of black activists to stop whites from calling the cops on black people. Since April, the following “news” items have gone viral in the national press:

Two black dudes went into a Starbucks, refused to order anything, and demanded to jointly use the bathroom. Per policy, they were asked to leave, and when they wouldn’t, the cops were called. As a result of public outcry (“public” defined in this case as bored leftists looking to jack off on outrage), Starbucks’ CEO closed all stores for a day of “diversity and tolerance training,” and a new nationwide policy was enacted to ensure that one needn’t have to order food or drinks to claim a table at Starbucks, and the bathrooms are now open to all, from the homeless to the glory-holers.

The black dudes were violating Starbucks’ (then) policy, but no matter. Let them do as they please, and don’t call the cops.

A black student at Yale decided to sleep in her dorm’s common area. A white student called campus security officers, who asked for proof from the black student that she lived in the dorm (the name she gave didn’t match up with the records in the student database). She refused to provide ID, and screamed “racism.” In response to the public outcry (“public” defined in this case as narcoleptic Negroes), Yale’s president promised swift action to fight “racism, prejudice, or discrimination at Yale.”

The nappy napper was totally violating Yale’s policy regarding dorm use, which clearly states that students are not allowed to sleep in the common areas. But no matter. Let her do as she pleases, and don’t call the cops.

In Oakland, a group of black people decided to barbecue with a charcoal grill in an area of a public park in which barbecuing with charcoal was expressly prohibited. A white woman notified police, who ended up having to shield the woman from the taunts and insults of the enraged rib-grillers. CNN went national with this “racist” incident—“white woman won’t allow black residents to eat barbecue”—while omitting the fact that charcoal barbecuing was indeed prohibited in that part of the park. As a result of the media coverage, the white woman became the subject of online hate and harassment, and the city announced that from now on, blacks can grill anywhere in the park they want (black residents literally held a party to celebrate the policy change).

In a Santa Monica College parking lot, an elderly white man was caught on video arguing with a black woman over the fact that the woman had taken up two parking spaces with her car. Unfortunately for gramps, he said the “n-word” during the spat, which then (of course) escalated to a physical fight. “Old man nigger” was arrested and charged with a “hate crime,” and Santa Monica College’s president pledged to “take immediate action” to ensure that no black parking-space hogger is ever treated that way again.

In Milwaukee, NBA player Sterling Brown decided to park lengthwise across two handicapped parking spaces while he went shopping in a Walgreens (arguably the biggest and most egregious “fuck you” an able-bodied man has ever given to the handicapped). When police noticed his rather poorly hidden crime, they waited for him to emerge from the store. He refused to take his hands out of his pockets (idiotically replying, “I got stuff in my hands,” like that was going to make the cops less concerned), and he walked up on the officers with such a look of defiance, one cop, noting the placement of Brown’s car, asked incredulously, “You don’t see the issue here?” Still refusing to cooperate, Sterling got smelted with a Taser. In the following days, the police department and mayor apologized and launched an investigation into the officers’ actions, and Brown released a statement in which he blamed the melee on “abuse of power” on the part of the cops (because using your big-ass car and pro-athlete sense of entitlement to prevent handicapped people from parking is totally not an “abuse of power”).

Not all of these recent incidents have involved cops. In late May, a black woman went into a Portland vegan bakery after closing hours. The “open” sign was turned off, and two white women ahead of her had just been told that the business was closed for the night. Still, the black woman demanded food. When she was informed that the store was closed, she ran to social media, wailing about “racism.” It soon became a national story, and the bakery fired the employees who’d been on duty that night. In a statement, the bakery said that although the employees had been following protocol and were “not racists,” they had been fired anyway because of demand from the “clamoring public” (“public” defined in this case as fat-ass, no-gluten-eating black busybodies).

To apologize to the community for daring to have a closing time, the bakery sponsored a “reparations happy hour” at which all black customers were given $10 to spend on food or drinks. Writing in The Oregonian, “journalist” Eder Campuzano claimed that the “reparations” event was necessary because “a black woman was kicked out earlier this month.” The fact that the woman was not kicked out but merely told that the store was closed mattered not to Mr. Campuzano, who is either the most dishonest man in journalism, or mentally retarded. Based on his photos, I’d say it’s a toss-up (Campuzano refused a request for comment).

In Alabama, a Waffle House was picketed by black activists for calling the cops on a black customer who made violent threats against employees. In Pennsylvania, a golf club was denounced for politely asking a party of black golfers to follow the rules regarding pace of play, and then calling the cops when they refused to comply. In New York, a black man, by his own admission, woke his downstairs neighbors by spending the night stomping and shouting while on the phone. The neighbors, who are white, left a note on his door, asking him to be more considerate. Activists (aided by The Washington Post) vilified the neighbors for objecting to the noise (as this was the first time in NYC history that an apartment-dweller was called out for being noisy, it had to be racism!).