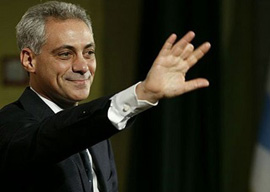 Born and raised in Chicago, Rahm Emanuel only saw “military service” once, when he volunteered to rustproof brakes on Israeli”not American”vehicles during the first Gulf War. He opposes terrorism, but only the Islamic kind”his father was a member of the Zionist terrorist group Irgun, which gleefully murdered British civilians in Palestine during the 1930s and 40s. Since my veins flow with British rather than Israeli blood, my instincts flow negatively toward Emanuel and his father because of this.

Although a severe minority statistically, Jews are said to contribute half of the Democratic Party’s total monetary haul. As if Barack Obama were a shiny pet pony, Emanuel famously trotted him before AIPAC in 2008 to receive the Zionist interest group’s benediction as their chosen presidential candidate.

When Obama appointed Emanuel as his Chief of Staff in 2008, Rahm’s ex-terrorist father Benjamin said, “Obviously, he”ll influence the president to be pro-Israel. Why wouldn”t he? What is he, an Arab? He’s not going to be mopping floors at the White House.” When Arab groups complained, Rahm offered this hollow apology: “These are not the values upon which I was raised or those of my family.” It was his own family member expressing those “values,” and Emanuel’s hawkish war policies have led to thousands of Arab (and goyish American) deaths in the Middle East.

While campaigning for Chicago mayor, he has sternly warned that pensions and jobs need to be slashed. He also eagerly slashed jobs while making a reported $16.2 million as an investment banker in his fleeting couple of years between working for Clinton and running for Congress. He clocked $320,000 merely for having to attend a half-dozen yearly meetings at Freddie Mac during the reputed height of its corruption. He also destroyed American jobs and bankrupted ordinary Americans as a cheerleader for NAFTA, Obamacare, the banking bailout, and the trillion-dollar-and-counting Middle Eastern war extravaganza.

In a recent Chicago mayoral TV ad, Emanuel had the audacity to say that it’s high time politicians started working for the people’s benefit rather than the people working to make politicians rich. His matzoh balls were big enough to say that politics “isn’t about making sure that those who are best connected or have friends are getting jobs.” This is from a man who climbed under, up, through, and over the Daleys, Rezkos, and Blagojeviches to achieve national prominence. Even though he was rated DC’s second-most corrupt politician, we”re to believe this former ballet-dancing midget will bring honesty back to the Windy City.

When I saw this video of Emanuel”who, as a Congressman, received more than twice as many campaign dollars from shady financial hedge-fund types than anyone else in the House or Senate”deliver a smarmy “love letter” about greedy oil companies, I rolled my eyes. So you side with rapacious banksters rather than rapacious oil barons”how noble! Then, when I learned he”d lived rent-free for five years in a DC apartment owned by a British Petroleum client”possibly influencing the Obama Administration’s sludgy response during the BP oil spill”I realized he was born without a core and would snuggle with the oil companies, too, if he got a free condo out of it.

So after doing my research, I hate his soul even more than I hate his face. He’s so full of shit, it oozes out of his ears like muddy shampoo.

After two relentlessly unpleasant days of poring over articles and pictures, I finally started noticing his fingers. They”re tiny. I found myself obsessively freeze-framing YouTube videos to try and gauge his fingers” size. Despite how “tough” everyone says he is, Emanuel is a diminutive man”he’s officially listed at 5″7″, but some allege that he is unfairly “heightening” with shoe lifts and might only reach 5″4″ on a good day in his bare feet.

His right hand’s middle finger was amputated during a meat-slicing mishap in Emanuel’s teens, but even the digits surrounding it seem partially amputated. Fully extended, his index finger still appears shockingly small. Gesticulating to a reporter on the Chicago campaign trail, his fingers seem no larger than Vienna sausages. If it didn”t belong to a man in his fifties, I”d guess that his thumb belonged to a child. Even with the fingers on both hands fully extended, he’s coming up way short.

All along, he’s been acting precisely like a guy with tiny fingers. The City of Big Shoulders may soon be ruled by a Man with Small Fingers. If they choose to elect such a Napoleonic tyrant, that’s their problem.