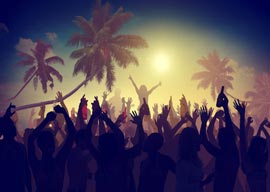 On college campuses, rape is pretty much anything that makes a woman uncomfortable. At Spring Break 2015, it appears that not even real rape is considered rape. The police recently tracked down a 17-year-old girl who was being molested by a mob of guys after performing for them naked. She told them everything was cool. I was told of two separate cases where a passed out girl lay naked on the beach as men took turns having sex with her. That’s called rape, kids. “We need to teach our boys not to rape” the other panelists keep telling me. We do. Rape gets you 15 years in jail. We also need to teach our girls not to get into a state of mind or go to a place where rape is perfectly normal. Last year, I was horrified to learn about an overweight girl who sat naked and semi-conscious on a stack of beach chairs as men walked by fingering her anus and vagina until they got bored. That nightmare sounds tame compared to the stories I heard this year and the biggest difference appeared to be drugs. 2014 had plenty of pot and booze and even some cocaine but this year, such tame highs are are quickly being replaced with molly (“ecstasy” AKA “MDMA” AKA “E”) Adderall (pharmaceutical speed), OxyContin (pharmaceutical heroin) and real heroin. The latter two are not just particularly dangerous drugs. They are killers that have been taking over Florida for a while now. The pharmacist I spoke to told me that OxyContin abuse was rampant in the early 2000s because prescription pads weren”t properly marked with serial numbers. To combat the “pill mills” that came from this weak legislation, the manufacturer changed the formula so it was harder to inject. That’s when everyone switched to heroin. People die from all these drugs. A couple just overdosed on molly at a rave in Toronto. The party promoter I spoke to told me that the PLUR (a rallying acronym that stood for Peace, Love, Unity, Respect) raves we went to in the 90s have been replaced with “”roided out dudes waiting for girls to pass out so they can take them back to their hotel room.” Parents should be concerned about all hard drugs but heroin is another story. At best it leaves you semi-conscious and perfectly fine with just about any violation. At worst it kills you. We lose about 6,000 people a year to that drug. I”ve lost a dozen friends to it in my lifetime. The reporters I spoke to said they had never heard heroin mentioned so often at a Spring Break party.

That’s why parents should be afraid. I literally created Vice and I”m shocked. I”m obviously not against hedonism or sex outside of marriage. I love the idea of young people partying and getting into trouble. I don”t want my kids to be puritans who avoid the real world. I”d just like their wild years to be in the same universe as mine were. Spring Break in 2015 isn”t just another crazy party. It’s a drug-addled rapefest populated by predators. If you advocate this because it makes you feel like a cool parent, you are hurting the people you purport to empower.Today, this attitude defines liberals more than any other attribute.