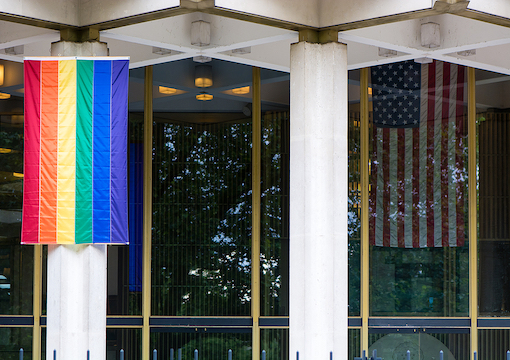 One of the many excellent uses of reality is that it can be used to test ideological and political theories. No matter how good the idea seems in the lab, the only way to know if it will work is to give it a go in the real world. The best example of this is the seventy-year social experiment called communism. The acolytes of Karl Marx tried to prove that the human condition was nothing more than a social construct.

Granted, reality can be a cruel master. No one really knows how many people Stalin murdered while getting the experiment going. The best guess is tens of millions died under Soviet communism. Then you have the Asian experience. The Black Book of Communism puts the number at 94 million. It is a good reminder that reality can remain stubborn longer than the ideologues can pile corpses.

It looks like the rulers of the Global American Empire are ready to put their favored ideology to the test in the real world. Multiculturalism is pretty much a religion with the ruling classes, despite the fact that most of them live like white nationalists. For them, “diversity is our strength” is not just a marketing slogan. They really think that diversity in all of its forms is the key to creating a global paradise.

“From a certain distance you cannot help but look at this and see that the universe has a sense of humor.”

So much so, in fact, that the United States military is making diversity its No. 1 priority up and down the chain of command. Pedro Gonzalez reports in Chronicles that Bishop Garrison, senior adviser to the Secretary of Defense, is pushing ahead with Critical Race Theory and a Diversity, Inclusion, and Equity program to make the military the most diverse institution on earth. They will be the rainbow warriors of the glorious future comrades!

As opposed to the university or even corporate America, the military is an unforgiving place when it comes to theory and practice. The point of the military, of course, is to project the power of the ruling class. It is the physical manifestation of ruling-class authority and power. If it cannot do that, then the ruling class has a serious problem, so this commitment to diversity is quite a gamble. The Global American Empire needs the military to maintain itself.

Adding to this, of course, is the looming confrontations with Russia and China at the edges of the empire. Joe Biden has been trying to start a war with Russia over Ukraine, which means the U.S. military would face its toughest test in generations. The Russians are tough and smart. They are not Afghan goatherds or desert nomads, both of whom proved to be too much for the American military to handle in the long run.

Of course, there is China. They would like to recover Taiwan and become the regional hegemon, so they keep testing American resolve. This is where things get interesting with regards to the religion of multiculturalism. A declassified Pentagon report says that the Chinese are racists. That is right. They are racists! In the language of the new religion this means the Chinese do not embrace multiculturalism. Russia suffers the same sin regarding sexual deviancy.

Now, most already know that the Russians are no fans of the various sexual fetishes that have been sacralized in the West. They oppose gay marriage and the indoctrination of children into the gay lifestyle. Washington hates this, which is why they display rainbow flags at the embassy in Moscow. The Russians are not big fans of cross-dressers and other exotic inventions of multiculturalism.

The Chinese, on the other hand, take this a step further. On page 90 of that Pentagon report, Chinese intellectual Liang Qichao is quoted as saying, “Someday in the twentieth century, we Chinese will be the most powerful race in the world.” The report notes, “The [Chinese] attitude towards blacks is that they are ugly, uncivilized, and have a low degree of intelligence.”

The report goes on to describe how Chinese racial purity is at the center of the party elite’s worldview. China’s rulers promote the idea of racial purity as an advantage and something that must be defended. They see multiculturalism in the West as a cancer on European societies that will eventually destroy them. The racially pure Han will come to dominate the West as it descends into impurity.

What this means is that we have two opposing ideologies that will now be tested on the battlefield of reality. The war will not be fought only by militaries, but by all of the institutions of society. America is sure that the rainbow warriors will not only best the racists on the battlefield, but in all other areas. In that Pentagon report they claim that racism is what will eventually be the downfall of China.

For their part, the Russians and Chinese are taking the exact opposite view. They think multiculturalism is turning America into a battlefield of alien cultures and races, which will pull the empire apart. They suspect that men in dresses do not make the best soldiers and that girls are not the best diplomats and strategists. The geographically challenged Liz Truss would seem to confirm that opinion.

The beauty of this field test is that there is no middle ground or solution in which both sides can claim victory. Repressive tolerance is the keystone of the new religion of multiculturalism, so there can be no peace until those racists and their racist racism are wiped from this earth! That means the only solution, if the Russians and Chinese want peace, is to bring down the Global American Empire, thereby consigning multiculturalism to the dustbin of history.

Given that all three players in this grand social experiment are armed with nuclear weapons, the body count promises to dwarf communism. Even if it does not get to that point, the sight of carriers sinking to the bottom of the sea is likely. Again, the Russian army is not made up of Neolithic tribesmen. Both the Russian and Chinese have advanced weaponry and very modern military tactics.

The result also promises to be quite ironic. If multiculturalism prevails, it means the Russians and Chinese survived communism only to be wiped out by men in drag waving rainbow flags. If racism prevails, it means America won the Cold War only to lose to her former enemies. From a certain distance you cannot help but look at this and see that the universe has a sense of humor.

In the end, it is wise to bet on reality. The ideologues of the new religion of multiculturalism are not much different from their predecessors. They are sure reality can be whipped with the right amount of enthusiasm. They will come to learn, like their current opponents, that reality is that thing that does not go away when you stop believing in it. Reality is undefeated for a reason.