Reflections on the English Identity 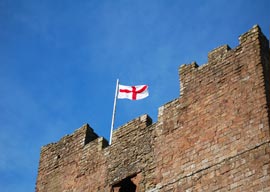 I was standing in Stamford, Lincolnshire on Saturday, admiring as always the architecture so splendidly Georgian it is used for filming Jane Austen adaptations. But that day the Palladian proportions were backdrop to something infinitely older in sense and sensibility.

Morris dancers stomped the street, the town, with tabor and pipe and concertina – twirling in green-and yellow tattercoats, whirling watchers back to a time long before Jane Austen, and in spirit almost before England. The “squire” of the “side” – a tall and burly man with large gold earrings – called orders, and danced with seven others in and out and between each other, punctuating each complicated maneouevre with whoops and clashes of sticks that made our two year old hide his head in my shoulder. The blackface make-up used by Border Morris teams contributed to the pagan effect, uncanny even when seen in full sun in an English street, surrounded by selfie-snapping yellowbellies. We knew that the dancers were really data entry clerks or healthcare workers, that their side had not existed very long, and that there are no records of such dancing in England before the fifteenth century. But somehow when they smeared themselves and trod the old steps they altered into avatars from The Golden Bough, connected to something dark and deep that runs beneath the apologetic English surface like an aquifer.

“Englishness was so long bound up in imperial adventurism that it found itself lacking meaning once the Empire had been dissolved.”

And it is apologetic – as eager to apologise as a Hugh Grant stock character in full self-deprecatory mode. In contrast to the Scots, Northern Irish Catholics and to a lesser extent the Welsh, the English rarely express pride, or even any sense that they exist as an ethnic and cultural community, whom Bede was already calling English in the seventh century, and who have been united politically since the tenth. A recent study showed that some Englishmen can trace their roots back even before Bede (incidentally revealing that the conventional Saxon/Celtic dichotomy is largely nonsense), while in 1997 a West Country history teacher discovered he was a direct descendant of a man who had lived a few miles away 300 generations previously.

Yet this venerable polity has no political party to rival the Scottish National Party (six MPs, two MEPs, 64 Members of the Scottish Parliament, expected to slaughter Labour in Scotland on 7 May), Sinn FÃ©in (five MPs, three MEPs, power-sharing in Northern Ireland), or Plaid Cymru (three MPs, one MEP, eleven members of the Welsh Assembly). St. George’s Day is not a holiday in England, as St. Andrew’s is in Scotland, or St. Patrick’s in Ireland. Unlike the Welsh dragon or Scottish saltire, or even the Union Jack, the Crusades-evoking red cross on a white field is regarded as dangerous and, even worse, declassÃ© – fit only for football or the English Defence League, a disturbing totem for a despised underclass that clings onto its identity the more fiercely as it is hacked away from under their feet.

Many English people shudder, sigh or snigger to see their own flag. Students shun it, Labour councils loathe it, and ex-government ministers claim its flourishers have a “propensity to violence”. Academics deny English existence or dismiss it as retrograde and racist. Contemporary poets (except Geoffrey Hill) do not celebrate it. Rock stars (except maybe Morrissey) sing of other things. Even at the Last Night of the Proms, the annual acme of English musicality, St. George’s flags are usually easily outnumbered by British. Furthermore, many of the English melodies played on that night are really British, in which Englishness is absorbed into imperial fantasies (Rule, Britannia, Pomp and Circumstance, Land of Hope and Glory) or outrÃ© theology (Jerusalem).

Englishness was so long bound up in imperial adventurism that it found itself lacking meaning once the Empire had been dissolved. At home, England has so long been the dominant force in these islands that it has become complacent, and finds itself unable to adjust to diminished status. As The London Review of Books observed,

“It seems they [the English] take their exceptionality so much for granted that they don”t even bother putting a name to it.”

A nation which cannot define itself will find it difficult to defend itself.