Return of the Fifth Columnists 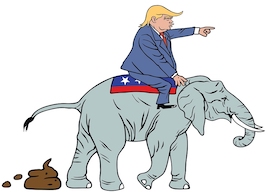 A fifth columnist is a supporter or secret sympathizer of an enemy nation, and the phrase was coined by Spanish nationalist general Emilio Mola Vidal. Before World War II broke out in 1939, Europe was awash with charges of “the fifth column at work” being bandied about by both appeasers as well as those who wanted to stand up to Hitler. One thing was for sure: Jewish groups were adamant that appeasing Germany was the work of fifth columnists; until the Soviet-Nazi peace agreement was signed, that is. (Twenty million dead afterward, and Europe in ruins—appeasers didn’t look as wrong as previously thought.)

Those dreaded two words are hardly used nowadays, although subversion that undermines a nation’s solidarity by any means is alive and kicking. The New York Times, The New Yorker, MSNBC, CNN—I could go on naming most of America’s mainstream media—have done their utmost to reverse the 2016 presidential result. To call them fifth columnists would be an understatement. When the 45th president openly declares he’d like good relations with a country that has more nukes than we do, they call him a traitor. (Coming from an ex-head of the CIA, this is a bit rich.) When he calls a spade a spade, like the “shithole countries” that are sending their criminals over here, they forget that no truer words have ever been spoken, and instead ask for the smelling salts.

What got me thinking about fifth columnists was a new book that I, of course, will neither buy nor read by one Max Boot, a so-called neoconservative who has announced in his opus that he’s leaving the Republican Party for good because he cannot be associated with people who like Trump or those who voted for him. Losing Boot, of course, feels like losing an obese dead man in a tiny overcrowded lifeboat in a storm. The Republican Party is well rid of him, because if ever there were a fifth columnist among conservatives and Republicans, it was the likes of Boot and that poisoned dwarf William Kristol.

“Losing Boot, of course, feels like losing an obese dead man in a tiny overcrowded lifeboat in a storm.”

Boot is described by the Times as a “lifelong Republican with sterling neoconservative credentials,” which only means to little ole me that he was an American fifth columnist working full-time for either Halliburton and the military-industrial complex, Israel, or both. Boot’s book is called The Corrosion of Conservatism, another misnomer because if anyone has corroded the Republican Party and stolen the conservative ethos, it’s people like Boot, David Frum, the poisoned dwarf, and their ilk.

Boot emigrated from the Soviet Union in 1976 when he was 6. He was the son of Jewish refuseniks who were obviously in the good books of the Soviet Mafia because they came out with money. Once over on these shores, young Max began reading National Review, hence his neoconservatism. When Pat Buchanan, Scott McConnell, and I were preparing to launch The American Conservative in 2002, Boot wrote a scathing critique about how we had nothing new to say. Well, he was right, in a way. The only thing we had to say, and the reason for starting TAC, was that we did not want to go to war against Iraq, a country that had not only helped us in the region, but had done our dirty work for us. But the Boots, Frums, Kagans, Feiths, Abramses, and poisoned dwarfs had other ideas. Israel was always under attack, real or imagined, and Saddam was supposedly a danger, so it had to be war, and those three silly old men had to be silenced. Boo, down with Pat and Taki. (See what I mean about Boot being a fifth columnist?)

In his opus, Boot apparently hates all Republicans, especially Senators Ryan and Rubio. Trump, needless to say, is worse than Hitler, although Max Boot, a Zionist par excellence, would rather eat pork than write that. I actually heard Boot speak at some event in New York last year. It was an auction for charity, and Boot had introduced the four-star general who leaked military tactics to his lover during pillow talk. He groveled like a groupie over the general on stage, and gave me a horrific look when I took the mike and asked the general why we were beating around the bush in Pakistan when we and the rest of the world knew full well that the Pakis were playing footsie with the Taliban, ISIS, al-Qaeda, and any other terror organizations one could think of. The general dismissed my query by saying, “The problem is much more complicated than you present it.”

Of course it is, if you don’t wish to face the truth. Otherwise it’s simple. Cut off aid and declare India our great friends, and watch Pakistan come over and kiss our you-know-what. But there was the pillow-talk general and the Boot-licker, and little ole Taki was dismissed as a nuisance. The subheading of his book is “Why I Left the Right.” That’s also a misnomer. You were never on the right, asshole, you were always a fifth columnist most likely on the take by military providers or Israel or both. Thank God you’re gone. Now I can call myself a conservative again.