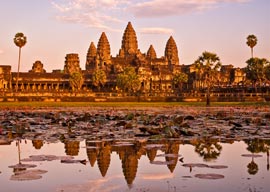 In Europe today, modernist architects such as Renzo Piano, Jean Nouvel and Lord Foster (and their predecessors, admirers, acolytes and followers) are such barbarians, albeit using a slightly subtler method of destruction, namely that of entire townscapes in order to impose their so-called vision, which is indeed visually inescapable, on what already exists, thereby in effect destroying it, turning the whole world into Dubai.

To return briefly to ISIS: perhaps there are some, no doubt, who would cavil at lamentation over its destruction of ancient monuments. What is such destruction compared to its beheading and other crimes? But this objection implies that there is no connection between the two, which is unlikely. Even without the killing, though, the destruction of ancient monuments would be a terrible crime. I am as attached to my own life as the next man, but honesty compels me to admit that Angkor Wat is more important for humanity than my survival.

A lack of attachment to civilisation is wider than we would like to imagine. I once went to Monrovia, the capital of Liberia, in an interregnum of the civil war there. There were no telephones, no banks, schools or hospitals open, there was no running water or electricity supply, and every institution had been destroyed with a thoroughness that I have never seen equalled.

The Centennial Hall was the city’s main venue for ceremonies such as the inauguration of presidents. It was, of course, deserted when I visited. In the centre of the floor was what was probably the country’s only Steinway grand piano. Its legs and pedals had been carefully sawn off and disposed around it, the body of the piano lying flat on the ground. Around it in a ring, like a necklace or a bracelet, the people who had done this, or those of like mind, had disposed their feces.

I described this in the little book that I subsequently wrote about my short stay in Monrovia. I said that it signified not just a revolt against a particular political situation, but reflected a revolt against civilisation itself. (Incidentally, there is a fine book by Richard Curt Krauss, Pianos and Politics in China: Middle Class Ambitions and the Struggle over Western Music.) The main criticism I received of my book was that I made so much of this scene: why worry about a mere piano when scores of thousands had died? Why worry about antiquities while people are being beheaded?