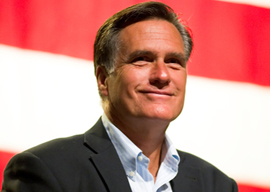 On July 11 Mitt Romney addressed an NAACP conference in Houston, and the GOP media oozed admiration for his presumed courage and outreach. Although Romney is not likely to get more than five percent of the black vote, our smiling warrior was still trying to court black leaders.

Romney’s presence in the enemy’s lair was only a triumph for those who are desperate enough to believe it was. The NAACP audience roundly booed him for about ten seconds when he criticized Obamacare. MSNBC and others featured pictures of Romney’s embarrassed face as he was being booed.

Romney spoke to his Obamaite audience about reaching out to “every race, creed, and sexual orientation.” Who said Reps are too stuffy to reach out? In 2003 it was not Obama but W who bewailed America’s sinful racist past during a visit to West Africa. In return for this gesture and prominently featuring blacks in his cabinet, Bush only won about 11% of the black vote in 2004.

“Whatever smarts Romney may have shown in business are clearly lacking in his presidential bid.”

Obama is too busy focusing on core groups to make visits to the lion’s lair. Has anyone noticed him visiting Bob Jones University or explaining his views on gay marriage to a conference of fundamentalists? Obama is obviously looking for votes where he is likely to find them rather than making grand gestures to the other side.

Despite Romney’s efforts at ingratiation, other Republicans are playing hardball for his sake. All over the country now Republicans such as Pennsylvania Governor Tom Corbett are pushing for voter-identification laws. These measures look perfectly reasonable, and the requirement that voters present some kind of valid ID to cast a valid ballot seems to me a minimal attempt to avoid voter fraud.

In Pennsylvania as many as 750,000 may be turned away at the polls if the law is enacted. In Pennsylvania Obama leads Romney in the polls by about ten percent, but minus the voters who don”t have proper identification (even a driver’s license will do), the contest would be much closer.

The fact that Attorney General Eric Holder has refused to prosecute 2008’s Philadelphia Black Panther case as voter intimidation suggests this administration is not likely to correct voting abuses. After all, the reported abuses favor those who are now in power. But the (perhaps intended) effect of the ID laws will be to keep minorities from voting in the numbers they did in 2008.