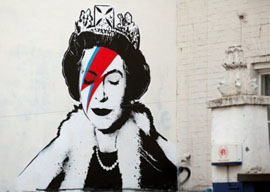 One can excuse mistakes”nervy presenters asking a woman with a Canadian maple-leaf flag where she was from”referring to the Queen as Her Royal Highness rather than Her Majesty”or a fashionista telling us that Kate Middleton’s hat had been made by the same milliners who made Nelson’s hat for Waterloo.

There was less excuse for Fearne Cotton addressing World War II veterans as if they were children:

This is obviously a huge ship, this is a weighty ship. How have you enjoyed your day cheering the Queen?

Cotton gravely examined such elegant souvenirs as a solar-powered ice-cream scoop, a fluorescent tabard reading “High Viz, Diamond Liz,” and a sick bag featuring the royal physiognomy. There were transvestites in Battersea Park and amateur artists accompanied by Anneka Rice, now destined to go down to posterior”apologies, posterity“solely for having won 1986’s Rear of the Year Award. There were sapient asides””Tower Bridge is about as iconic as it gets””and concerns about when the Queen might get the opportunity to do a Royal Wee.

What Miss Cotton would call “seven hours of spotless TV” has been savaged.

The BBC…is worried and nervous about being seen as Auntie and being too formal and too stiff.

In this, at least, it succeeded. So far there have been almost 2,500 official complaints, and the rightish media are almost as peevish as the leftish. Some gripes may be as trivial as that of the Daily Telegraph commenter who briefly turned away from the BBC’s shortcomings to focus sternly on someone else’s:

SIR”I noticed that our Prime Minister had his braces insufficiently adjusted to allow his trousers to hang correctly.

The volume and fullness of the fulminations hint that the BBC is another institution that too often relies on its past.

So there is more than one way of looking at the Jubilee, but for most observers the miles of media footage”most memorably the 1,000 dowdy vessels drifting through Elizabeth’s damp and disheveled domain”will be filed in the national archives, accruing allure as it ages, and coloring the future’s view of our present as having been another, more magical country.