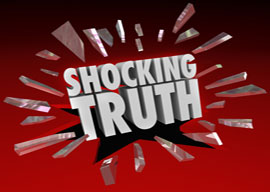 Is Salon.com the worst political commentary website on the Internet?

I ask not as a snarky observer, but a genuine inquisitor.

The webzine brands itself as a news outlet chock-full of hard-hitting analysis and investigation. It has also mastered the art of shock-and-awe headlines meant to gin up excitable liberals and enrage conservatives. As far as I can tell, this is a conscious effort on behalf of the writers. In the era of attention-deficit media, it makes sense to target explosive topics that force the other side to quickly respond. Former editor-in-chief David Talbot once commented:

Yeah, we’ve made no secret of that. I’ve said all along that our formula here is that we’re a smart tabloid. If by tabloid what you mean is you’re trying to reach a popular audience, trying to write topics that are viscerally important to a readership….

With attention-grabbing headlines such as “GOP’s economic war on women about to explode” and ““The Legend of Zelda” is classist, sexist and racist,” you can almost imagine the author typing furiously behind a desk, anxious to expose how terribly cruel the world really is. Because progressives are disgusted by the very nature of greed, it makes no sense to suspect a profit motive behind these outrageous polemics on victimhood.

“This is the world of egalitarianism, where the only success allowed is taking everyone else down a few pegs.”

That leaves one option: The writers at Salon truly do believe in the egalitarian bile they see fit to publish. If this is the case, the logical conclusion is the site’s readership is full of misfits who couldn’t make the basketball junior-varsity team in high school. That still does not explain why Salon is one of the most read political websites in the United States.

The worst offender of both objective criticism and good sense at Salon is Editor at Large Joan Walsh, who is gifted with the uncanny ability to spot racism in the most harmless of circumstances. She recently declared the government shutdown was really a racist ploy by Republicans in the House of Representatives. Her reasoning boiled down to: If you oppose the debilitating welfare state, you have it out for blacks. Tracing the gene of subtle racism back to the Gipper, Walsh, in all seriousness, writes:

You didn’t have to be racist to thrill to Reagan’s declaration that “government is not the solution; government is the problem,” though it didn’t hurt.

Basically, if you don’t bathe in obsequious acclaim for the first black president, you want deportation of all blacks just like Abe Lincoln did. The quasi-closing of Washington was just another attempt to cement the white man’s stranglehold over minorities. It all sounds plausible if you forget the government shuttered its windows (but not its thievery) under Gerald Ford, Jimmy Carter, Ronald Reagan, George H. W. Bush, and Bill Clinton. The majority of these shutdowns occurred as Democrats held the House, and namely while Tip O’Neill was Speaker. Walsh”and even more so her bloviating MSNBC colleague Chris Matthews”pays this historic record no mind. Cudgeling Republicans is far too important to allow facts to sneak in the way.

After some critics pointed out the absurdity of Walsh’s argument, the Salon Empress doubled down on her claim that all opposition to the president is driven by off-kilter hatred of the black man. ‘Tis another case of the tolerant, cosmopolitan liberal who is obstinate in her own beliefs and accepts no dissent.

Walsh’s cronies fare no better. Writer Michael Lind has lately taken to bashing libertarianism. He seems to enjoy calling the philosophy “juvenile” and “superficial” without having a clue as to what liberty actually entails. In trying to square the concept of Lockean natural rights into his circle of the nanny state, Lind once accepted Franklin Roosevelt’s vacuous and clichÃ©d Second Bill of Rights as a legitimate extension of the natural law understood by America’s Founding Fathers. To the progressive with a government-centric worldview, freedom really means the ability to shake down your neighbors so you can buy birth control and jerry-rigged public housing.