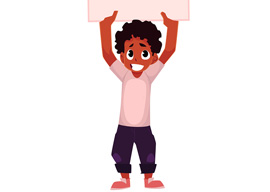 Move over, Muhammad; you’re no longer the only sacred icon that can’t be drawn as a cartoon. Black people are now on the small and exclusive list of things that will spark an instantaneous jihad if sketched by an artist. And the ground zero for black cartoon proscription? Chicago, a city in which blacks are so sacred, they compete with one another on a daily basis for martyrdom.

The fight against cartoons of black people started because of—what else?—Charlottesville. Last month, Illinois governor Bruce Rauner, a Republican who is no fan of Donald Trump, decided to virtue-signal to his state’s people of color by condemning “racism” and “hatred” in the wake of the Charlottesville violence. So how was Rauner’s pandering received? Illinois’ top black Democrats went after him even harder, embarking on a snipe hunt of massive proportions in an attempt to nail him for being a “secret” racist. And what evidence did these sleuths unearth? Something so ghastly, so offensive, it became the top news story in the state for over a week. They uncovered…a cartoon.

But let’s rewind for a moment. The Illinois Policy Institute (IPI) is a libertarian nonprofit think tank based in Chicago. Two of its main issues are school choice and charter schools. On its website, the IPI recently featured a political cartoon of a black child sitting against a wall on a city street. The child, wearing a school backpack and a Cubs cap, is holding a sign that says “Need Money 4 School.” An evil, rich white man with a cigar is walking past. The wealthy villain snidely says to the child, “Sorry, kid, I’m broke,” exposing his empty right pocket while hiding the fact that his left pocket is overflowing with cash earmarked “TIF” (“tax increment financing,” a public financing scheme very popular among Chicago’s corrupt politerati). The IPI’s point with the cartoon was that Chicago schools don’t need a government bailout because politicians are already sitting on a stash of TIF money.

An eager-to-learn black child in a Cubs hat asks an evil white politician for money for his school, and the malevolent Caucasian crook lies to the kid about being broke, even though he has plenty of cash. You might be thinking to yourself, what could possibly be offensive to Democrats about that? The message of the cartoon is pro-black, anti–wealthy white folks, and pro–school funding. This could be a cartoon on Salon or HuffPost.

“Even with all the outrageous nonsense I cover each week, this one stands out as uniquely retarded.”

Not so fast! You need to actually see the cartoon in question. I’ll provide a link, but first a caveat: Never in your life will you witness anti-black racism as vile and vomitous. You think you have a strong stomach? Get a bucket ready. In the immortal words of Daffy Duck, “Girls, you better hold on to your boyfriends.” Okay, here it is.

Yes, it’s the worst thing ever. The black child’s skin is darker than the white guy’s skin, and his lips are fuller. This is the sole reason the cartoon was declared racist. This is the sole reason the story dominated Illinois politics for a week, and why it was picked up by the AP and The Washington Post. A black child in a political cartoon was depicted as looking black.

Chicago mayor Rahm Emanuel blasted the drawing as a “disgrace” and “unambiguously racist” (the mayor’s definition of “unambiguous” might need a little fine-tuning). State rep Carol Ammons, who is black, tweeted “Imagine being a child of color and seeing this depiction of you as you return for a new school year” (you mean, a depiction of a cartoon black kid? The horror!). The entire Illinois House—Democrats and Republicans alike—spent an entire day making speeches denouncing the cartoon. Democrat rep Jaime Andrade, damn near in tears, took to the floor to call the cartoon “shit,” prompting a bipartisan standing ovation. There’s no reason that the IPI “should describe colors and races of people,” Andrade whined as his fellow politicians applauded as though those words made even a lick of sense. Republican rep Tom Demmer joined in: “Cartoons don’t make racism any more palatable.” Democrat rep Christian Mitchell described the kid in the cartoon as a “Sambo.” Even Illinois comptroller Susana Mendoza chimed in, calling the cartoon “vile and racist” (and honestly, in debates of great social significance, who isn’t interested in the comptroller’s opinion?).

In its quest to get to the bottom of the story, the AP brought in art history professor Amelia Rauser of Pennsylvania’s Franklin & Marshall College. Prof. Rauser, who is white, bluntly explained why the cartoon is so racist: “It’s using these tropes that are so fraught. Just the fact that he’s small and given darker skin. It’s a little too extreme, the Sambo stereotype.”

It’s racist because the black child is “small” compared with the adult. Seriously, I ought to be hardened enough by now that it shouldn’t bother me that a college professor thinks it’s racist to portray a black child as being smaller than an adult. But no. Even with all the outrageous nonsense I cover each week, this one stands out as uniquely retarded.

Obsessively pursuing the “racist cartoon” story like Ahab but with less circumspection was NBC Chicago’s ace scoop-meister Mary Ann Ahern, who dogged Governor Rauner (the “I hate racism” anti-Trumper), demanding that he comment on the cartoon. Curious how the left tied Rauner into this? Well, he’s a donor to the IPI, and he hired several of its officers for his staff. So therefore all content that the IPI posts on its own website is magically his responsibility. For days on end, Ahern pummeled the gov with cartoon-related tweets (six alone on Aug. 22): Have you seen the cartoon? Will you comment on the cartoon? Will you denounce the cartoon? Is Marmaduke related to David Duke? Etc., etc.

Initially, Rauner responded like any rational person would, declaring, “Let me be clear, I’m not apologizing for anything that I have nothing to do with.” When Ahern simply wouldn’t let up, Rauner’s office released a statement (later clarified by Rauner himself) declaring that as a “white male,” the governor didn’t feel qualified to wade in on a topic that involved blacks and their experiences with racism. And then things really hit the fan! Leftists slammed Rauner for declaring himself a “white male,” because even though we are bombarded daily with pap from the left about how “privileged white males” are not qualified to opine on matters involving minorities and racism, the fact that the governor and his staff, virtue-signaling yet again, tried to cater to the left’s insanity only caused the leftists to attack with greater ferocity.

The cartoon was pulled from the IPI website, and four of Rauner’s staffers were forced to resign. And most important, the “scandal” wiped away all memory of Rauner’s post-Charlottesville Trump denunciation and anti-racist prostrations. Rauner was now the worst Nazi of all time, because of a cartoon he didn’t draw that appeared on a website he doesn’t control.