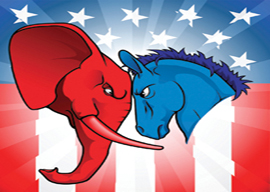 The Washington Establishment Party (WEP) presented a deceptive “choice” to a confused, unwary American electorate. It must be evident to most neutral observers that the Democratic and Republican Parties constitute little more than two WEP front organizations and that there is no substantive difference between them save for style and spin. WEP is a revolving door for ambitious career politicians.

Representing the Democrats in one corner was an upstart mystery man, the junior Senator from Illinois, Barack Obama. His career trajectory has been astounding. Barack O is a brilliant talker”cerebral and crafty. A consummate con man. During the campaign he posed as an outsider promising “change.”

In the other corner was Arizona Senator John McNasty. He was a Navy brat from the US Naval Academy at Annapolis. Son of a famous admiral, he finished near the bottom of his class. He fought and crash-landed in Vietnam. Surviving prison camp, he launched a second career by cashiering his first wife and marrying an Arizona beer baroness. Bankrolled and renewed, McNasty became a permanent Capitol Hill fixture. McNasty is an ex-wrestler, an entitled roustabout with a hair-trigger temper who’s intent on telling the rest of the world what to do in true neocon style. He is a bully like G. W. Bush.

Our current predicament at the dawn of the third millennium begs the question, “Can democracy be regarded as a waste of time, a wrong turn in humanity’s history?” My answer is yes, it probably should be regarded as such. Think of all the time, money, and effort spent on these elections which could have been avoided if there existed a system such as that of the ancient Venetian Republic, where governance was left up to a patrician class composed of duty-bound individuals who elected a figurehead king.

In this manner, the average person would not be bothered and caught up in the spectacle of irrelevant elections which has resulted in putting mountebanks, opportunists, and jackasses into the White House and Congress and keeping them there for a long time.

The 2008 election confirms what has been suspected by thoughtful people since at least 1900. Politics is passÃ© and a pack of lies.