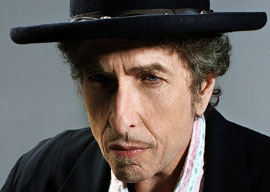 After academics and race mixers are prevented from making a living they cease to be a threat, but artists are even more dangerous because they get into your mind. Ted Rall is a progressive liberal cartoonist with radical ideas, which annoys the middle-class whites. When he recently drew a cartoon that many people said made Barack Obama look like a monkey, the head honchos at Daily Kos explained Rall was trivializing black suffering: “No excuse is acceptable for replicating that history,” they warned him, “no matter what your intent. If it happens again, your posting privileges will be suspended.”

In their eyes, the only thing worse than an uppity artist is an uppity Jew artist. Bob Dylan is currently being investigated for “incitement to hatred” after claiming Serbians and Croatians don’t get along. If he loses this battle, he will be forced to pay a fine. One is reminded of another Jew, Ezra Levant, who lost years of his life and hundreds of thousands of dollars to a similar accusation. Then there was the Jewish writer behind the HBO show Girls who was raked over the coals for daring to be flippant about “hipster racism.”

They hate gay writers, too. When Stephen Jimenez finally finished his painstakingly researched book The Book of Matt: Hidden Truths About the Murder of Matthew Shepard, they called it “Trutherism” and accused it of undermining helpful hate-crime legislation.

Though the Scarlet Letter has changed over the years, the victims are still the same. The authorities doing the flogging haven”t changed much, however. America’s first gun-control laws were created to prevent blacks from getting guns. The Nazis were in favor of gun control, obsessed with environmentalism, they hated smoking, and their boss was a vegetarian. They were your typical socialists. Before the Nazis, we had the KKK, an organization supported and enabled by Democrats.

They claim they”re for the greater good, but controlling people who don”t know what’s good for them often means killing them. Communism has piled up over 100 million bodies trying to help people. Get a few beers into the environmentalists over at the United Nations Population Fund, and they”ll tell you the best thing for the Earth would be a lot more death. One of the reasons Planned Parenthood was created was to prevent more blacks from being born.

These atheists have always wanted to play God. We used to call them racists and fought on behalf of the minorities they oppressed. Then they coopted the word and now it’s them calling us racists. Now they can destroy all the blacks, gays, race mixers, writers, and artists who stand in their way. The bad guys haven”t changed. They just use different words. Crusaders for equality pretend they’re ruining lives for the greater good, but it’s still only rich white people fucking over the vulnerable.