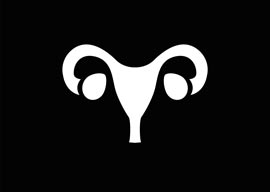 I”d forgotten, though, that Steinem ably mocks her “sisters,” too, taking their cheeky “War is Menstruation Envy” buttons to their illogical extreme:

All feminists would explain endlessly that men, too, needed to be liberated from the false idea of Martian aggressiveness, just as women needed to escape the bonds of menses envy. Radical feminist would add that the oppression of the nonmenstrual was the pattern for all other oppressions (“Vampires were our first freedom fighters!”).

Maybe the Society for Menstrual Cycle Research overlooked that part when, citing her famous essay, they chose Steinem as the first recipient of the “Making Menstruation Matter” Award in 2012, which, I swear, really happened.

(What does the statuette look like? I wonder. A giant gold-plated tampon mounted on an “overnight” Always?)

Speaking of menopause, what have I forgotten?

The semi-big deal about the deletion of the “iconic” “tampon scene” from the film adaptation of 50 Shades of Grey.

As I noted last year, I missed my chance to cash in on menstruation mania when it cycled through 25 years ago.

Maybe I”m mellowing out in my old age, but I”m trying to stay sanguine about that.