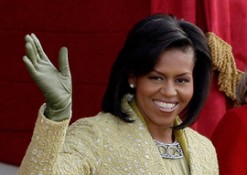 August is in full swing and it’s the Hottest Summer on record, Ever, so anyone who’s anyone is either on a boat, up in the air, or two feet from a beach. The First Lady is no exception—she’s been vacationing in Spain this week with nine-year-old daughter Sasha. Not everyone welcomed America’s first lady to Marbella with open arms, however, as some residents were complaining over special treatment for the Obamas and their 70 Secret Service agents. Apparently, roads were paved and one local beach closed to the public in case Michelle and Sasha wanted to take a swim.

Also seen out in Spain this week were Princess Letizia and daughters Leonor and Sofia. The adorable trio were spotted in Mallorca before visiting Crown Prince Felipe during his yachting competition. Somehow, reading about others’ vacations isn’t as depressing when they look so happy. Is it too much to ask for a play date with the Obamas?

After her weekend long celebration in Rhinebeck, Chelsea Clinton is nowhere to be found—and that’s a good thing. Another couple not named the Mezvinskys is looking to profit off the Wedding of the Century. The owner of the Astor Courts mansion where Chelsea was married has upped the asking price on the 50-acre estate. If you’d like to live and love like Chelsea, it’ll cost you a cool $13.5 million. Kathleen Hammer and her husband were criticized for blatantly publicizing the house after the wedding. Even Donald Trump was critical, calling their real estate tricks “tacky” and “disgusting.” When even Trump is calling you out for being gauche, you know you have a problem. But there’s no such thing as bad publicity—Susan Sarandon is rumored to be one of the home’s prospective buyers.

New York’s retail industry received an influx of cash when Princess Maha al-Sudairi dropped into town this week. The notoriously spend-happy Saudi Arabian princess is said to have dropped $20,000 on glassware and stemware from a gift shop on the west side—and even tried to sweet talk the owner into giving her a deal. He didn’t and she bought the goods anyway. This wasn’t the first time her credit card has made a loud statement. Last year she allegedly spent more than $15 million at 30 stores in Paris.

It helps to have friends in high places. Rosie and Oprah are teaming up on daytime TV. Oprah is giving Rosie her own daytime talk show on her new network. Since she won’t have to deal with Elisabeth or Barbara, expect Rosie’s new gig to be tamer than her stint on The View, but sparks will still start flying on January 1.

Barbra Streisand didn’t actually mind that Jennifer Aniston dressed up like her for the latest cover of Harper’s Bazaar. Jen had the hair and makeup exactly right, and Babs said she was “very flattered” by the cover. “She’s a delightful person, and I think she did a wonderful job. If only she had a bump on her nose.” Perhaps Babs forgot—Jen did have a bump, and had that fixed a few decades ago. Still, even a poor imitation is a form of flattery.

Wyclef for Prez! Wait…Wyclef for Prez? Sometimes singer Wyclef Jean told Larry King this week of his plans to run for president of Haiti. He has a surge of support already in the country still devastated by the earthquake—who doesn’t love a celebrity?—but Sean Penn likely won’t be campaigning for Wyclef’s run. The Oscar winner, who has been staying in Haiti for months since the disaster, says Wyclef was a “non-presence” there and “He has been virtually silent for those of us in Haiti.” There’s also that little issue of $400,000 given to his charity that Wyclef has been accused of pocketing. Might we suggest that Sean Penn challenge him? This story has Oscar written all over it.