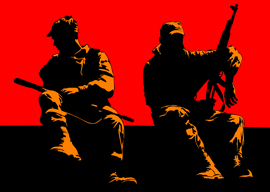 I was raised Catholic, so no matter how my soul yearns to be free of piety, I have to break down and roll around in the stuff now and again. So let’s support the troops by giving some well-deserved attention to an Afghanistan veteran’s autobiographical novel. It cost me a whole three bucks to buy Samuel Finlay’s Breakfast With the Dirt Cult on Kindle, but mmm-hmmm, I feel like ten dollars” worth of virtuous.

Most of the time the words “autobiographical novel” make me want to boil the writer’s keyboard in Frappuccino. But events during Finlay’s service fell into such a perfect narrative arc, he”d have been nuts to toss it out: On leave before deployment, the hero meets a bookish Canadian stripper who swears that if he comes home alive, she”ll have a legendary affair with him. He earns a sergeant’s rank, leads his men to battle, gets his hand shot to mincemeat, dreams of her in the hospital while giving birth to an unspeakable morphine constipation loaf, then tracks her down”and that’s where it gets gory.

For us civilians, the consumption of war fiction is having our cake and eating it too. Supporting the troops is a blame-free, aisle-crossing class outing that gets you extra credit with everyone. And when it comes to reading pleasure, a well-done war narrative like Finlay’s gives you all the camaraderie, the rough-and-tumble wit, the excitement, and the hardtack philosophy of being a warrior”without once having to climb a ridge in the lip-cracking desert sun, much less take a bullet. No wonder this is selling like hotcakes.

“”From what I gather, military-related stuff is sort of like the clap of the literary marketplace.””

Wait … what? You haven”t heard of Breakfast With the Dirt Cult?

I hadn”t either, till Finlay sent me a query himself.

Finlay couldn”t even find a publisher.

“When I first started shopping around an early draft,” he tells me, “Band of Brothers had been on TV just a few years prior. There was even a war on and everything.” Unfortunately, Finlay’s narrative strikes an unmarketable medium: it’s too thoughtful for a shoot-“em-up, but he doesn”t “paint the military as a bunch of evil pseudo-Nazis” for the benefit of would-be intellectuals, either.

When he was in basic training and the officers pulled the fire alarms all night to mess with the recruits, he had indeed resolved to write a blazing bucket of spleen about how full of shit the Army was for all the world to read. But then 9/11 happened. And the guys he went to war with, including some of his superior officers, turned out to be such good people that he couldn”t write something so simplistic.

He could be fair and complex till he was blue in the face, however: agents and publishers were “all pretty much looking for the next Sex and the City,” says Finlay. “From what I gather, military-related stuff is sort of like the clap of the literary marketplace.”

He guesses he got about 500-800 rejections. He finally self-published in 2012, but without the support of a house, sales have been too depressing to even keep track of. He paid for some ads out of his pocket around last month’s July 4th celebration, but they “barely moved the needle.” He isn”t sure whether there’s really no market for current war fiction or whether publishers just think there’s none.

Now that you mention it, where are any of the big hit soldiers” books and movies from this perma-war?

The Mideast deployment is now longer than the two World Wars of lore put together, yet not even the people’s medium of television is showing much from Afghanistan, Iraq, or wherever we”re sending grunts this week. Band of Brothers covered World War II, the History Channel is stuck on Vietnam, and the publishing industry keeps churning out litfic and “clit lit.” As Adam Haslett writes in Prospect, “the most widely read and highly regarded books in the war have been written by journalists.”

If you”re writing from the soldier’s point of view, Finlay says, “unless it’s linked to a cartoon, video games, or some supernatural or intergalactic shit, you”re pretty much humped.” One agent told Finlay that “a lot of it had to do with the fact that the current wars were unpopular and that the news was always showing stuff about them and everybody was more or less sick of hearing about it.”

Just last week, Finlay got this from an agent:

I appreciate the opportunity to consider your work for possible representation, but having been sent countless memoirs/”novels” based on war experiences from WWI to Iraq without experiencing any success with them, I”m not the right agent for it …

There are a couple of good short story anthologies out”one titled, ironically, Fire and Forget“and every couple of months a major-media writer on a literary beat attempts due diligence for the trickle of novels that have seen traditional print. George Packer of the New Yorker dutifully put together an essay on the genre this year”but it’s prefaced by a 1233-word intro about, you guessed it, World War I and II and Vietnam fiction.

Finlay says: “Frankly, I”m not sure where [Packer] is getting his info. There really doesn”t seem to be the sort of interest he describes unless he’s trying to prime the pump. An ex-Marine named Chris Hernandez has a funny, angry sit-rep on his attempts at finding a home for his work which seems more like what I”ve seen.”