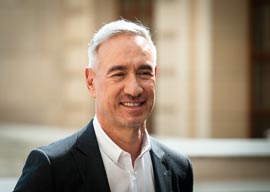 * A writer at BitterQueen explores the Mafia angle, with plenty of primary sources.

* On that subject, AIM.org is socially conservative, but in this instance its sources are not:

One witness to what happened reports that Police Department deputy inspector Seymour Pine had two stated reasons for the raid: “The Stonewall was selling liquor without a license, which it was, and it was being used by a Mafia blackmail ring that was setting up gay patrons who worked on Wall Street, which also seems likely.”

* Another eyewitness, this time at DataLounge””Serving up this steaming pile of Gay celebrity gossip, politics and pointless bitchery since 1995″”explains at length that “Drag queens starting Stonewall was a myth all along.”

Many gay men and lesbians routinely speak of it as if it was a sacred event that lies beyond the reach of objective discourse…. They recite the name “Stonewall” itself with the same reverence that American politicians reserve for the names of Washington and Lincoln.

Indeed, Obama somberly conflated Stonewall with Selma and Seneca Falls in his second inaugural, and beyond. The “Selma” equation is particularly egregious, as this quietly clever short film demonstrates in painstaking detail”again, simply quoting radical gay activists themselves.

Years before those patrons at the Stonewall bar hurled garbage, beer bottles, feces and four-letter words at the policemen who had come to arrest them, a few small groups of men in business suits and women in dresses staged sober, orderly marches at which they carried signs that announced their own homosexuality and that respectfully demanded an end to anti-homosexual prejudice. Those people were even more radical than the rioters at Stonewall, and”dare I say it?”perhaps even more brave, given how few they were, how premeditated their protests and how much some of them had to lose by publicly identifying themselves as gay.

Indeed, while researching this column, I stumbled upon a grainy photo of a sign posted after the riots by members of one such group:

I”ll bet my battered, beloved copy of The Celluloid Closet that that sign is nowhere to be seen in Stonewall.