Sexually Charged: From Charney to Seagal 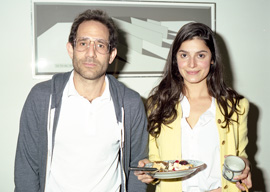 Sexual-harassment lawsuits began in the mid-1970s but really gained momentum in the politically correct 90s when radical feminism helped expand the definition of “rape” to include “anything that makes a woman unhappy.”

Women were given prejudicial consideration in these cases and the perpetrators were crushed without hesitation to discourage other victims from hiding in the shadows. Sounds good on paper. Unfortunately, women were soon using this newfound strength to become predators themselves. In today’s workplace, sexual harassment is wielded like a phallic sword and plunged into the chest of any boss who fits the target profile.

A frivolous lawsuit’s perfect victim is an unsympathetic figure. Maybe he gets laid too much or he’s a loudmouth who gets on people’s nerves. It helps if he’s ugly or Jewish or into younger women. If he’s been through this before, you can bandy around the idea that he’s “known” for this sort of behavior. He (always has to be a “he”) also needs to be powerful and have lots of money to lose. If his company is faltering and they”re looking for investment, they don”t want any bad press. If he’s famous and his whole career is based on having a wholesome image, he’s the perfect patsy.

What defines sexual harassment is so nebulous it leaves lawyers an orgy of possibilities. The law seems to divide the charge into two categories: quid pro quo and basic sexual harassment. The former means rewards were provided in exchange for sexual favors. The latter means the employer did not hire enough Hazmat workers to make sure the company’s air particles had been completely deionized of sexual vibrations. How to define a “sexually charged” environment is anyone’s guess. Right now Times Square is covered with twenty-foot-high Victoria’s Secret billboards where a woman’s lacy tit is big enough to feed a family of five hundred. But if an office behind one of these billboards has a Sports Illustrated swimsuit calendar on the wall, the owner is violating the law. In 1993, a University of Nebraska graduate was ordered to remove the photo of a bikini-clad woman from his desk. It was a vacation photo of his wife.

You don’t have to look far to find examples of frivolous lawsuits. My own father was accused of making an inappropriate comment by his company’s HR department. They told the female “victim” in question she didn”t have to tolerate that kind of behavior, but she didn”t even remember the quote they were talking about (something about another coworker looking like a penis), nor did my father. She and my father were and are good friends who thought the whole thing was insane. The “charges” were soon dropped.

A few years later, I was asked to go to sensitivity training after being overheard saying, “I love fags” at work. No fag was present during this horrible hate crime, and these “charges” were also dropped.

A couple of nights ago, I saw a Tweet that said, “[fashion photographer] terry richardson is just lord-god-king of the scumbags.” It linked to an article claiming Terry had demanded sex in exchange for giving a model “the fame.” I”ve known Terry for ten years and watched him get repeatedly bulldozed by this allegation. But I”ve attended the shoots these women are complaining about. I”ve even posed for him naked and standing on my own foreskin (NSFW). I”ve seen women hit on Terry and I”ve seen women turn him down. In both directions, it was completely uneventful and pressure-free.

“In today’s workplace, sexual harassment is wielded like a phallic sword and plunged into the chest of any boss who fits the target profile.”

In the “Scumbags” article, the model claims she spoke to Terry on Facebook. Terry is the least computer-literate person I”ve ever met, and he has never had a Facebook conversation in his life. If anyone thinks they were talking to Terry on Facebook, someone was fooling them. I Tweeted that I”d pay the other Tweeter $1,000 if Terry had anything to do with that conversation, and a follow-up discussion with a Richardson associate over the phone confirmed I was right.

People have even been charged with sexual harassment while trying to prevent sexual assault. In 2005, University of Georgia journalism dean John Soloski lost his job for asking a coworker if she was alone. He had worked with the woman for several years and was concerned about her safety because she was leaving a black-tie event late at night in downtown Atlanta. He was told the only thing that matters is how she perceived his comment, and she said it made her uncomfortable. Four years later, a judge finally called the probe “arbitrary, capricious and unreasonable.” This is almost always the case when these allegations make it to a judge. The problem is, they rarely do. It’s not only cheaper to settle; it’s less embarrassing. To fight a major claim and let it go all the way to a judge can cost upward of $1.5 million. Some of the smarter hustlers will simply ask for $60,000. These are the ones we don”t hear about and when you can”t isolate a virus, it’s hard to develop a vaccine.

“The law needs to be amended to correct the rampant abuses,” says Celia Farber in a brilliant overview of the Andrea Mackin v. Bill O’Reilly case, “and the only way that will happen is if people don’t settle. If, instead, they fight, we might see better standards enforced.” O”Reilly was being sued for sexual harassment in 2004 for having phone sex with Mackin. Instead of hanging up the phone, Andrea recorded it, and she wanted $60 million for the suffering she endured. If she had hung up the phone, the suffering would obviously have been much less”perhaps even as low as $10 million. O”Reilly said he was going to fight. He even charged Mackin with extortion, claiming they had a long relationship that included dinner and a trip to his undoubtedly swank hotel room. But he eventually settled, which only encouraged more shakedowns of the Sexual Harassment Money Tree.

Why are these women asking for monetary compensation? If someone gropes you at work or on the train coming home, that’s sexual assault”a felony under the right conditions. Press charges. If your boss masturbates in front of you, put him in jail. It’s called “public lewdness” and can also be a felony. But asking for hush money almost encourages him to do it again. In fact, accepting money for sexual favors is the legal definition of prostitution.

Celebrities are especially vulnerable to these suits because their whole brand is their reputation and all it takes is one allegation to turn Pee Wee Herman into Paul Reubens. While shooting the movie I”m Still Here, Casey Affleck was accused of acting inappropriately on the set. Two production assistants, Amanda White and Magdalena Gorka, demanded $2M and $2.5M respectively. Affleck initially refused to settle, explaining that if anyone was being inappropriate, it was the girls. He let the case go public, then suddenly chickened out and paid them off. Bones hunk David Boreanaz almost fought the charge but eventually paid off a woman who said he masturbated in front of her. Again, if he did it, why wasn”t he charged with public lewdness? Doesn”t she want this wanker off the streets?

Last year when I heard that Steven Seagal was charged with “sexual harassment” and “illegal trafficking of females for sex,” I thought what most people probably thought: “What a pig.” He fits the target profile perfectly. One imagines a shipping container brought in from China with crying tweens vomiting into a bucket after three weeks at sea. Kayden Nguyen’s lawyer was well aware this is what people would think. As someone doing a reality show about being a Louisiana cop, Seagal couldn”t afford this kind of publicity. But he can. He’s rich. So he fought the case. Soon, the public learned she applied for a job as his assistant. She said she couldn”t afford a plane ticket, so he paid for it. After working there for a while she claims he asked her if she wanted a massage. She then says, “It became clear to me that he wanted and expected sexual favors as part of my job duties.” Because he paid for the plane ticket, he’s now also sex trafficking. His show was put on hiatus and God knows how many people were put out of work during this charade, but Seagal insisted it go to a judge and all charges were dropped. It was later revealed that she was angry after being fired for using drugs.