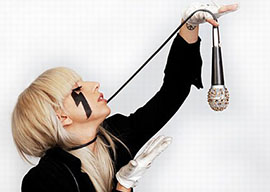 Happy New Year, gossipmongers! While you were swaying to Auld Lang Syne, sipping your third glass of Champagne, and praying 2011 will dish out stories equally as juicy as Gibson’s voicemail tirade and Sandra’s public break-up, the stars were busy hooking up, having babies, and resolving to resuscitate their careers. Let’s dive in.

Little monsters have a new reason to shriek in 2011. Lady Gaga finally teased a release date for her sophomore album Born This Way, with the album hitting stores May 23. Always cryptic, Gaga tweeted “THE SONG 2 13 11 THE RECORD 5 23 11.” “Born This Way” is also the name of the single which you”ll be hearing ad nauseam for the next three years. Joy!

They say you should ring in the New Year with people you want in your life for the next 365 days. Maybe that’s why everyone watched Snooki insert herself in a hamster cage-like ball for her very own ball drop on MTV’s New Year’s Eve special. She was booted from dropping the ball in Times Square so the beer-soaked fest moved to the only appropriate location: Jersey. With Jersey Shore set to premiere its third season this week, the public still can”t get enough of the slurring pint-sized guidette. Snooki’s words of wisdom for those nursing day three of a hangover: “Drink more!”

Leonard DiCaprio had a only slightly classier evening with Bar Refaeli on his arm this weekend at his villa in Cabo San Lucas. Naomi Campbell, Nicky and Paris Hilton (plus fiancÃ© and boyfriends), the art world’s Tony Shafrazi, and Jessica Alba also attended. Random mix, no?

Meanwhile, Cameron Diaz and Alex Rodriguez invaded Las Vegas for the glitzy celebration. They had dinner at Aria on New Year’s Eve Eve and partied at the Cosmopolitan’s grand opening concert. Chris Martin and Gwyneth were also on hand, along with Jay-Z and Beyonce, John Mayer, Kanye West, Rihanna, Blake Lively, and the list goes on. The star wattage was centered in Sin City this year, leaving poor little Ryan Seacrest alone with Ke$ha in New York at Dick Clark’s New Year’s Rockin” Eve.

Ashton and Demi rarely set foot in the States anymore. They were frolicking around St. Barts for a few days, jet skiing all over the Caribbean before attending Roman Abramovich’s end-of-year party with Salma Hayek, Jason Statham, and Ellen DeGeneres. On January 1, they stayed on a massive yacht with Russian billionaire Andrey Melnichenko and Martha Stewart. 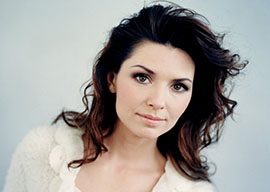 Shania Twain‘s real-life husband swap is a done deal. The country star married FrÃ©dÃ©ric ThiÃ©baud in Puerto Rico over the holiday. Remember, ThiÃ©baud’s wife and Twain’s husband allegedly had an affair that broke up both their marriages. Love, then heartbreak, then love”all with the same spouses. Get to writing, Shania, there’s a rollicking country song in this messy, ultimately happy situation.

What happens when two fading stars collide? A black hole? Terrible film? We could soon find out. Page Six coyly reported that Meg Ryan is a “new friend” of John Mellencamp, who recently separated from his wife of 18 years. The odd couple is working on a musical together, with Ryan voicing one of the characters. Check back in a couple months, we predict these two crazy kids will soon be having messy public make-out sessions.