Smut on the Mountie 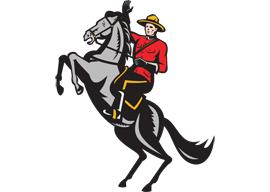 There aren”t even many “Sexy Mountie” Halloween costumes on offer, and we”re talking about a society that’s recently witnessed the rise of Sexy Anne Franks making the October 31 party rounds. (At this rate of cultural decline, I”m pretty sure “Sexy Sharon Tate’s Baby” is, well, on the way.) The only “Sexy Mountie” outfit I could find on the Web looked more like a Star Trek “Red Shirt“ getup but with a spectacularly horrible (foam!) hat.

Maybe the Mounties spend so much time monitoring unauthorized appropriation of their famous image that they”re neglecting boring stuff such as, say, remembering not to tase helpless, mixed-up people. My personal favorite of all their in-house criminals? Constable Justin Harris, accused of both “paying a prostitute for sex” and “refusing to pay at all.”

You”d think they”d at least appeal to some foreigners” taste for the exotic. Here at home, however, we”re less likely to view the RCMP as heroic. But since they decide whether or not I get to keep my guns or buy more of them in future, I”d better shut up now.

Better to end with the final verse of a poem bill bissett penned at the height of that barn-burning scandal called “th wonderfulness uv th mountees our secret police”:

its mor than musical
th ride theyr taking
us all on