Softly Putting the Monster to Sleep 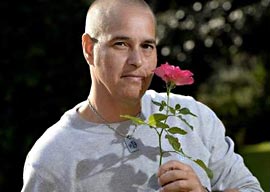 Shortly before Christmas last year Wim Distelmans facilitated the double euthanasia of deaf Belgian twins who’d been informed they were going blind. Forty-five-year-old Marc and Eddy Verbessem lived together and communicated through a form of sign language that only they and their family members understood. When informed that they’d lose their sight, they dreaded the specter of not being able to see each other and abjectly falling into the hands of caregivers whose faces they’d never seen. So they wore new suits and shoes, had some coffee, and drifted off to Never Never Land via lethal injection as their family members watched.

But they didn’t choose to die because they were dying already. They chose to die rather than live a soundless, sightless life completely unable to communicate with another human being. And I can’t blame them one bit. I would have chosen the same course.

But choice is the crucial element here, and according to a recent poll, Belgians don’t seem crazy about choice. Three quarters of them said they support euthanizing children with terminal diseases, even without the child’s consent. A similar quotient favored euthanizing adults with severe dementia”again, whether or not the demented adult had any choice in the matter. And a proposed law would legalize euthanasia for terminal kids and demented adults.

More troubling is the fact that in a study of 248 Belgian euthanasia deaths in 2007, 120 of them”nearly half”involved “a patient who received life-ending drugs without his or her explicit request.” Other studies have shown a similar quotient of euthanasia procedures being conducted “without request.” Technically, that’s illegal. Technically, that hasn’t stopped it from happening, either. Nor has it stopped the emergence of a cottage industry that peddles the harvested organs of euthanized patients. Quite literally”at least in terms of market value”many people may be worth more dead than alive.

While it’s quite a leap from voluntary euthanasia for late-stage cancer patients to imagining a sprawling industry of lucrative, legalized child-killing and kidney-farming, please forgive me for having seen Soylent Green at age 12. Soylent Green was a Charlton Heston sci-fi flick depicting a dystopian future where old people can go to a clinic that allows them to comfortably end their own lives surrounded by music and imagery of their choosing. The film’s title refers to society’s primary protein source in the future”little green crackers made from ground-up human corpses. Sorry, but the movie scared me.

If there’s any such thing as a fundamental human right, it should be the ability to choose when you kiss the world goodbye. The state should have no say-so whatsoever in the decision. This is why the situation in Belgium”that tiny, culturally schizoid living womb of the European Union”skeevs me out a bit. Maybe I’m overreacting, but I recoil at the idea of the government sticking its dirty beak into the euthanasia biz. I suspect it’d take the government all of two minutes to go from euthanasia to extermination, straight into some sick reincarnation of Aktion T4.

And as the world population explodes and resources get scarcer”at least that’s how I, in my Malthusian delusions, expect things to go down”forced euthanasia of society’s undesirables might suddenly seem ethical and prudent. And it’s a slippery, slimy, sickening slope from snuffing physical and psychological “undesirables” to wiping out ideological ones. Therefore, Big Brother is not invited to the suicide party. When it comes to putting the monster to sleep, it’s best to let the monster decide.