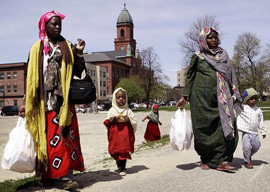 It’s the same all over the Anglosphere. Kathy Shaidle laid out the situation of Canadian Somalis here on Taki’s Mag a few days ago. (Kathy only had space to cover homicide, terrorism, drug-dealing, and female genital mutilation. Here’s a rapist to round out the picture.)

Australia? TIME magazine reports that “An estimated 16,000 Somalis have found refuge in Australia since the beginning of their country’s civil war 17 years ago.” Well, they should be pretty well settled in, then. How are they doing? “Unemployment remains a huge problem.” Oh, dear. Why is that?

See, the Australians need to adopt the British practice of giving the Somalis a nice house in a posh neighborhood. Then their kids would all be brain surgeons and software entrepreneurs in no time!

That TIME story, by the way, is mainly concerned with a police sweep last week in Melbourne to round up terrorists. “The police claim they had foiled a suicide plot by Al-Shabaab supporters to storm a Sydney military base and kill as many soldiers as possible.” (Al-Shabaab is a Somali Islamist group.)

Somalis and terrorism go together like Hindus and spelling bees. The chap who tried to blow up the city Christmas-tree-lighting ceremony in Portland, OR, last year is, yes, a Somali refugee, one of over 100,000 the USA has taken in since the early 1990s.

As the resident New Zealand watcher for Taki’s Mag, it would be remiss of me not to check in with the Kiwis on this. How are their Somalis doing? New Zealand has settled about 4,000 Somalis, and they have already made their mark—with, for example, New Zealand’s first-ever plane hijacking.

Now look: Any population has a lot of variation, and I have no doubt there are many law-abiding and industrious Somalis. When you take in 4,000, or 16,000, or 100,000, though, the law of averages is going to kick in—as it kicks in unmistakably in Somalia itself. Human-capital-wise, the Somali averages are simply terrible.

Things are rough in Somalia: chronic civil war, recurrent famine, disease, piracy. Private persons who are distressed by the Somalis’ plight should by no means be discouraged from doing anything they can think of to relieve the distress over there.

The reason nations have governments, though, is to protect and advance the interests of their own citizens. How the interests of Americans, Britons, Canadians, Australians, and New Zealanders have been advanced by having thousands of Somalis settled among them is not clear to me. Perhaps the State Department could send someone around to explain.