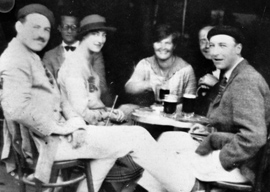 About 57 years and a month ago, in Ketchum, Idaho, Ernest Hemingway asked his wife Mary to sing an Italian song, “Tutti mi chiamano bionda” (“Everyone calls me blondie”), and after they both went up to bed he silently padded down the stairs, stepping softly so as to make no sound, went to the basement storage room, took out a double-barreled shotgun, inserted two shells, went back up to the foyer, leaned against the hard steel with his forehead, and pulled the trigger. The newspapers reported it as an accident. I read about it the next day in my aunt Sophia’s garden in Athens, and decided right then and there that the writing life was the one for me.

Fifty-seven years might seem a lifetime to you young whippersnappers, but it’s only yesterday to me. How clear it still is. The great man, unable to live up to his title as the world’s heavyweight literary champion (Norman Mailer’s invention), goes out like a champ, with a bang. He’d been in the wars too long. And it was a graceful exit, despite the mess. An overdose would have been very un-Hemingwayesque. In Papa’s fiction, tragic heroes died by bullet, like the Swede in “The Killers,” who is warned by Nick Adams that two pros are in town to kill him, but who stays in bed, looking at the wall, tired of running. Papa is out of fashion now, but so is sportsmanship, manhood, gallantry, even heterosexuality. And let’s not even mention Christianity.

What is there to say about Hemingway that hasn’t already been said or written? He was the first literary pop star before the P-word was invented. He wrote about the beautiful active life, the tranquil exhilaration of fishing, but also about the brutality of big-game hunting, bullfighting, and war. He resolved this dissonance in art by turning writing into marvelous prose. His masculine prose had the effect of the utmost subtlety. It was the hardest way to write because it seemed so easy and natural. Literary types called it nonliterary and vulgar—in the beginning. But Papa was following his idol, a certain Mark Twain, who had never been conventionalized by literary associations. After The Sun Also Rises became a great hit, men started to talk the way he wrote. “Have a drink” became a watchword. Heroic dissipation turned into a lifestyle for romantic wannabes.

“One thing is for sure: Papa elicited very strong reactions from people.”

Hem was criticized for the glorification and martyrdom of bullfighters—Edmund Wilson, a Papa fan, called it neurotic and drunken—but Papa gave back as good as he got: “Bull fighting is not a sport. It was never supposed to be. It is a tragedy. A very great tragedy. The tragedy is the death of the bull. It is played in three definite acts.” I once discussed Papa with Louis Miguel Dominguin, one of the five greatest bullfighters ever (Joselito, Belmonte, Manolete, Ordonez, and Louis Miguel). He didn’t like Hemingway, and said he (Hem) knew nothing about bullfighting. Well, Dominguin knew much more, I am sure, but the fact that Hemingway called Louis Miguel’s brother-in-law Ordonez the greatest ever must have played a part. One thing is for sure: Papa elicited very strong reactions from people. Writers, however, admired his work too much not to like him. James Joyce, Ezra Pound, F. Scott Fitzgerald, John Dos Passos, Henry Miller—they were all good buddies, although I never could find out if Celine and he ever met. The latter’s anti-Semitism was real, Papa’s was phony. He based Robert Cohn in The Sun… on Harold Loeb, a rich American playboy who lived in Paris during the ’20s. “Loeb, you kike, I’m writing a book and you’re in it,” he would yell at him in various bistros. But he liked Loeb, took him along on trips and played tennis with him and Ezra, and was known to punch people who said anti-Semitic things in his presence. Go figure, as he never said. (I tried to contact Loeb a few years ago as I knew members of the Loeb banking family, but he would not discuss the Paris years. Again, go figure.)

Loeb fell for an English so-called Lady, Duff Twysden (Papa turned her into Lady Brett Ashley), and made a fool of himself. Although from Michigan, Papa knew the real thing when he saw it. Twysden was not it, and Loeb paid for it. I sometimes dream about what Hem would have done with people like the Tchenguiz brothers, or others of their kind. As a very green Toronto Star correspondent, Papa had called Mussolini the “biggest bluff in Europe” when the rest of the world saw the Duce as the second coming. I never understood his sucking up to Gertrude Stein, but then I’ve sucked up to far worse. His only novel with an American setting was To Have and Have Not—a novella, really, its title alone proclaiming Papa’s consciousness of injustice and inequality in the world. Class-ridden Europe was his hunting ground. And despite the cruel barbs toward Scott Fitzgerald’s fascination with the rich, he also frequented some pretty old but good money.

And now we come to war. He witnessed it three times, from up front. He said that A Farewell to Arms is a Romeo-and-Juliet story. His account of the retreat from Caporetto is his best sustained piece of narrative ever. Unlike the motley modern crew, he believed it was bad luck to talk about writing.