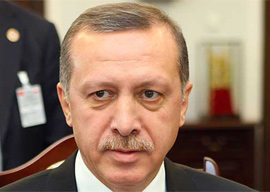 Last Thursday, Turkey’s Foreign Minister SÃ¼leyman Soylu reiterated ErdoÄan’s longstanding threats. In response to the rally bans”which were framed as a screaming injustice by the Turks, even though it’s the first time I can recall hearing of a nation holding political rallies in a foreign country for an election in their own country”Soylu taunted the EU with the specter of Turkey crapping new refugees all over Europe:

We have a readmission deal. I”m telling you Europe, do you have that courage? If you want, we”ll send the 15,000 refugees to you that we don”t send each month and blow your mind.

Consider my mind blown, at least by the audacity of a spokesman for a NATO member threatening other NATO countries.

Yet again, Soylu’s comments clearly constituted a threat, which should yank the flying carpet right out from beneath the deluded no-borders one-worlders who insist the only hateful threats come from indigenous Europeans who blanch at the idea of their homelands being invaded by hostile aliens with no intentions of assimilating and who clearly articulate that their purpose is instead to conquer.

Europeans are instructed to believe that the Turks, as well as any Syrians they foist upon Europe, come in peace. They are expected to ignore the bloody 500-year reign of the Ottoman Empire and how it tortured, executed, and enslaved countless Slavs”hence the origin of the word “slave” itself. They are commanded to ignore the Ottoman Empire’s role in the Barbary slave trade, in which anywhere from one to three million white Christians were captured and held in thrall to their Muslim masters. They are expected to ignore the Armenian, Greek, and Assyrian genocides the Ottoman Turks perpetrated. They are told to turn a blind eye to all of this or risk being called a “racist””or maybe even a “Nazi” by ErdoÄan himself. And many modern Europeans are so weak and flabby and fearful, they would rather be decapitated than called a racist.

Turkey”with a Muslim population estimated at anywhere from 96 to 98 percent“has often been touted as an example of a Muslim country that can also support secular values and manage to avoid becoming a theocratic house of horrors in the mold of Saudi Arabia or Iran. Erdogan’s own words show that this idea is a pile of steaming nonsense:

You cannot be both secular and a Muslim! You will either be a Muslim, or secular! When both are together, they create reverse magnetism [i.e., they repel one another]. For them to exist together is not a possibility! Therefore, it is not possible for a person who says “I am a Muslim” to go on and say “I am secular, too.” And why is that? Because Allah, the creator of the Muslim, has absolute power and rule!

Some gratitude is due to ErdoÄan and his foreign minister, though. By making these threats last week, they probably did more than any non-leftist scribe in the West to prove that the military-age Muslim males currently pouring into Europe are colonists rather than refugees. And they plan to conquer Europe with their own babies.

No matter how much the craven bootlickers in the Western media love to mock Steve King’s comments, ErdoÄan rubber-stamped his approval on them. And no matter to what degree they try to gaslight Donald Trump as a delusional hatemonger, ErdoÄan proved that Trump’s “great Trojan horse“ theory was 100% correct”because this time, it came straight from the Trojan horse’s mouth.