Something Smells Vichy in France 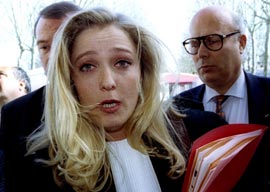 The modern triumphalist leftist mindset, despite its arrogant gloating that history is on its side and that their ideological opponents have been forever crumpled up and banished to history’s dumpster, remains comically paranoid that the slightest victory from anything deemed remotely “right-wing” will immediately usher in a Fourth Reich and a sequel of the Holocaust. It might even bring the Hitler mustache back in style overnight.

Therefore, news that the National Front is polling ahead of the pack and winning regional victories led to hysterical op-eds about an “ominous” and “frightening” resurgence of fascists, racists, xenophobes, neo-Nazis, and all the other two-dimensional murderous cartoon goblins that haunt leftist fever dreams.

But obviously, no one”not even fanatical leftists”is as two-dimensional as the mythical right-wing hatemonsters who supposedly huddle together like vampire bats amid the cold darkness of the far right. Nationalist movements across Europe likely feel as justified in their gripes and grievances as anyone else does. They’re concerned about real things that the press and most politicians ignore”about Muslim schoolchildren bullying indigenous European kids, about being indentured to a European Union that is more autocratic than democratic, and about how their financial overlords want to smash every border and erase all cultural identity and are willing to ostracize, defame, and even jail anyone who so much as complains. They worry that the European Union is hell-bent on obliterating anything that is truly European.

France is the country that originated the practice of using the terms “left” and “right” to denote political orientations. But by modern standards, its national hero Charles Martel would be a far-right extremist serving time for Islamophobic hate crimes. And people who merely want to keep France, well, somewhat French are demonized as barbarians at the gates rather than the gates’ defenders. That’s a complete inversion of reality. It’s not far right or even far out”it’s completely upside down.

I don’t have much of an opinion on nationalism”I guess mostly it hinges on whether I’m fond of the nation in question”but I know it’s at least one step down from internationalism, so whether it’s “far right” or not, it’s a step in the right direction.