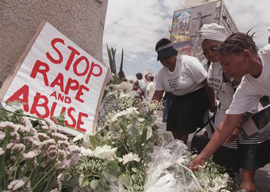 In such a “rape culture,” foreplay is for sissies, condoms are scorned, and females are encouraged to present with dry vaginas. If this cannot be naturally achieved, then ash, urea, and even sand are allegedly employed to facilitate traumatic entry. Invariably, there is vaginal damage, some of it serious, which accelerates the risk of STD transmission. While these observations might smack of unacceptable brutality, to some of those involved it is little more than agreeable sexual activity.

These differences in perceptions sometimes lead Africans to question whether Europeans are fit to judge their sexual proclivities. Critics are routinely damned as interlopers, while Western so-called “colonial” laws and Christian values are condemned as “racist.” It is widely accepted that the average African woman’s role is clear-cut. With few exceptions, they are there only to bear babies and burdens.

South Africa does not stand alone in some of these sexual excesses. As we have seen in recent African military conflicts, being a “soldier” armed with a gun guarantees unlimited opportunities for sexual gratification along with obvious perks such as looting and pillaging.

In some parts of Africa, female genital mutilation”the removal of the clitoris with the help of a razor or a piece of broken glass”is rampant. The UN estimates that between 130-140 million African women have endured such forcible primitive surgeries.

Women’s liberation has yet to reach the Dark Continent.