State of the Unions 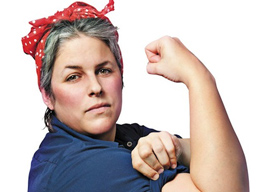 My maternal great-grandfather owned a large dry-goods concern which still exists. He was a decent man who took care of his employees, one of whom was Eugene V. Debs. (Though Debs later gained notoriety on behalf of workingmen, he remembered my relation fondly.) Grandfather continued to treat his laborers well. A tender recollection was his funeral procession passing the company grounds. It wasn’t a workday, but hundreds of the men stood in pouring rain to remove their hats as his hearse passed by.

My paternal grandmother experienced the other side of the labor coin. She was a line worker in a food factory for more than twenty years. She lost her hearing in one ear from working aside a thunderous processor and had her pension stolen after the operation closed shop.

My point is that nothing is one thing or the other. While many laws now seem irrelevant or redundant, there are often valid reasons why they were originally put into place.

School tenure has many problems, but it prevented legions of petty tyrants from extracting bribes from public servants. OSHA often goes overboard, but it is definitely within living memory when people suffered lifelong debilitations without such oversight. And while some industry leaders view their workers as charges or friends, more than enough regard them as chattel and subhuman.

This causes the appearance of “Right to Work” laws in multiple legislatures to give one pause.

Wisconsin last year hosted some of the most dramatic battles in decades as Republican Governor Scott Walker acrimoniously pushed through his version of Right to Work. Democratic lawmakers fled the state for weeks to avoid passage as a hundred thousand protestors descended upon the capital. Ultimately it was enacted, then struck down by judicial writ, and reinstated by the state Supreme Court. Union dues dropped precipitously, leaving several in multiple fields either to de-certify or not re-certify. State congressional recall efforts were a disappointment to union efforts with limited success, though this month one million signatures were collected toward recalling the governor.

In New Hampshire ahead of that presidential primary, candidates unanimously agreed that Right to Work should be implemented. The state House passed such a bill days earlier for the second time. Last November the legislation came within one dozen votes (out of 400) from overriding gubernatorial veto. New Hampshire Republican leadership has made passage a priority, with Republican legislators already reporting they’d been threatened with loss of committee assignments, redistricting out of electability, and blackballing of donors.

In Indiana last week the Republican-dominated House bullied through a Right to Work bill on a party-line vote which barred amendments not filed twenty-four hours prior to passage, despite the fact the hearing had been scheduled less than twenty-four hours prior to passage. They similarly prohibited debate, denied union officials their right to testify, and disallowed public comment. Earlier this month the Republican governor (who as Director of OMB for the Bush Administration swindled the country into war by grossly underestimating Iraq’s costs) endeavored to dramatically restrict citizens’ access to the Statehouse, coincidentally ahead of this divisive legislation. As a result, it now appears Democrats may walk out of the session in protest as they did last year in Wisconsin.

A cogent description of “Right to Work” laws is they make it illegal for unions to negotiate contracts requiring contributions from workers who do not, or choose not to, belong to such associations. These laws do not forbid unions or restrict negotiating on behalf of membership. They codify that those who do not wish to pay union fees are not forced to do so.