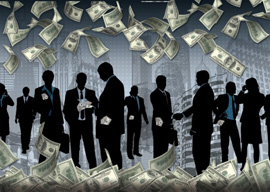 In the abstract world of economic thought, certain abstract thinkers have come upon the idea that “stimulus” spending will cure what ails you.

This pleasant bromide seems to have originated in the widely held myth that Hoover was an advocate of “austerity,” whereas FDR cured the Great Depression by spending like a drunken sailor. It is easy to think this, as it is a lie so often repeated it is now accepted as truth, even by people who should know better. I thought it was true myself until I read some newspapers from the era. In fact, Hoover was as up to date and modern as FDR was, creating all manner of public-works programs as a form of financial stimulus. Hoover was arguably the originator of the “financial stimulus” idea. Hoover first tested it in the post-WWI Europe reconstruction efforts which made him famous enough to be elected president. Hoover also increased the top income tax rate from 25% to 63% to pay for his stimulus, a remedy which would likely please modern-day stimulation fans.

FDR was really more of a fan of austerity than Hoover, attempting several times to get deficit spending under control. Hoover expanded the national debt from around 16% to 40% of GNP. FDR kept it at around 40% right up until 1941. Other harebrained schemes FDR attempted are little mentioned these days. The National Recovery Administration fixed prices, dictated profits, limited productivity, and more or less attempted to run the economy the way the Fascisti did. FDR socialized the gold supply, created tree-planting work gangs to keep underemployed young people off the streets, and created vast make-work programs in government-owned industries. He also engaged in giant infrastructure projects such as the building of dams, schools, houses, airports, bridges, canals, and hospitals.

“They look like a bunch of irresponsible kids who want to use the family credit card to buy hookers and booze.”

None of these projects made a difference. The economy was still an employment disaster in 1939, but at least we had some new “stuff” as a result of these economic tinkerings. It also didn’t incur any new debts, unlike modern “stimulus” ideas, which appear to have only stimulated banker paychecks.

The Great Depression only seemed to right itself once the nation geared up for war and made actual improvements to productive capacity. It wasn’t mindless “stimulus” spending that involved digging holes, then filling them in again. This was a genuine investment in the nation’s productive capacity. It was little different from a business issuing bonds to build new and more efficient factory equipment. I believe that this probably had important benefits for the American economy.

Deficit spending during WWII was almost entirely invested in factory and technological infrastructure needed to fight the war. Thousands of boats, tanks, and aircraft were built in vast new factories. Sewing-machine and typewriter factories were improved and automated to produce M1 rifles. Vast new electronics industries sprang up to produce the wonder weapons of sonar and radar and the hundreds of thousands of radios required for warfare. New technologies and supporting industries were developed: nuclear power, rocketry, jet aircraft engines, computers, and spread-spectrum radio transmission. All of these technologies improved human power over nature, created new industries, and improved economic productivity in ways which could scarcely have been understood at the time.