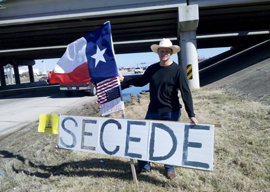 So begins the Declaration of Independence of the 13 colonies from the king and country to which they had given allegiance since the settlers first came to Jamestown and Plymouth Rock.

The declaration was signed by 56 angry old white guys who had had enough of what the Cousins were doing to them. In seceding from the mother country, these patriots put their lives, fortunes and honor on the line.

Four score and five years later, 11 states invoked the same right “to dissolve the political bands” of the Union and form a new nation. After 620,000 had perished, the issue of a state’s right to secede was settled at Appomattox. If that right had existed, it no longer did.

What are we to make, then, of petitions from 25,000 citizens of each of seven Southern states—116,000 from Texas alone—to secede?

“Yet we should take seriously what is behind this desire to separate and sever ties, for it mirrors what is happening across our civilization.”

While no one takes this movement as seriously as men took secession in 1861, the sentiments behind it ought not to be minimized. For they bespeak a bristling hostility to the federal government and a dislike bordering on detestation of some Americans for other Americans, as deep as it was on the day Beauregard’s guns fired on Fort Sumter.

Our Pledge of Allegiance still speaks of “one nation under God, indivisible,” but that is far from the reality in the America of 2012.

The social, cultural, moral and political revolutions of the 1960s, against which Richard Nixon and Ronald Reagan inveighed to win their 49-state triumphs, have now captured half of the country.

One America believes our history is a catalog of crimes against people of color, that women have an inviolable right to abortions, that condoms should be handed out to sexually active teens in schools where Darwinism should be taught as revealed truth, while Bibles, prayers and religious symbols should be permanently expelled.

The other America sees all this as unpatriotic, godless and decadent.

One America believes in equality of rights; the other demands equality of results brought about through the redistribution of income and wealth, affirmative action, racial and gender set-asides, and quotas.

One America believes in gun control; the other in gun rights.