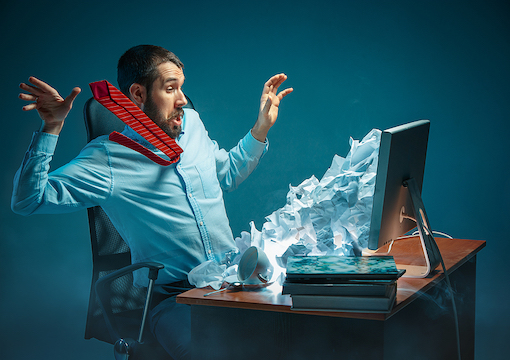 If by some blessed miracle the mass media in American suddenly went dark, one of the first things people would notice is the quiet. The outside world would remain as noisy as before, but the inside world, the space in your head, would get very quiet. The reason for that is the constant stimulation of mass media would no longer be there to sow confusion in your mind, causing that constant noisy irritation.

For example, you would no longer be constantly reminded that many of your fellow citizens believe insane things. Most would continue to entertain insane ideas, but you would not have the mass media blasting this into your head. Since most of those insane ideas come from the mass media, those prone to indulging in things like transgenderism or cultural Marxism would have no way to indulge in those ideas.

A big part of the racket in our heads is the ever-present knowledge that half of the people around us thought putting a deranged man with dementia into the White House would spite the other half of the people. The constant reminder of spiteful mutants puts even the most disciplined man on edge. It is that edge, that stress of knowing, that creates what feels like a riot inside your head.

“Today most people are like opium fiends, plugged into the mass media, getting a constant supply of the omnipresent lies and distortions.”

Mass media seems to play on a defect of the human mind that demands we instinctively trust that which is told to us. Even when the person doing the telling is a notorious liar, we humans seek out a reason to believe him. Perhaps it is just an aspect of our belief that all men can be redeemed. In the case of the mass media, it means there is a belief that it can be used for good instead of evil.

We know, for example, that the mass media is lies and inaccuracies. Most of what they claim is fabricated. Everyone can rattle off dozens of examples where it is clear the media simply made up a story. Every story that contains the phrase “sources say” or “sources tell us,” for example, is fake. It is either planted by their government sponsors or they just made it up because they needed material.

A good recent example is the hypersonic missile stuff. The claim is China has these new superweapons and America is falling behind the commies. This is complete nonsense as these weapons do not exist and probably will never exist. It is just a fake story to agitate the public. Despite this, even the most jaded critics of mass media thoughtlessly accept that the Chinese now have hypersonic weapons.

In other words, people who know the media lies constantly and is just pushing government propaganda will accept what is in the media about China’s alleged hypersonic weapons. Even when the physics of hypersonic travel through the atmosphere are explained, people will still accept the media claims. This is a version of what the late Michael Crichton called the Gell-Mann Amnesia effect.

Crichton described it using a newspaper. You open the newspaper to an article on some subject you know well. You read the article and see that it is full of nonsense, errors, and blatant distortions. Then you turn to the next story in the same paper, a topic about which you know very little. You accept on face value what is presented, forgetting entirely that the previous story was riddled with nonsense.

Back in the analog age, when most things were made of wood and mass media meant the newspaper and the occasional television show, the Gell-Mann Amnesia effect was not universal. Tuning out the mass media was quite simple, because you had to actively seek it out. Today most people are like opium fiends, plugged into the mass media, getting a constant supply of the omnipresent lies and distortions.

That is the other novel quality. Not only are modern people constantly rustled by the endless flow of mass media, but they are also hooked on it. There is a segment of the population that gets visibly angry when you point out that most mass media is just laughable nonsense. The people pushing it don’t even believe it. The response is similar to when you try to intervene with an alcoholic.

Marx famously said that “religion is the opium of the people,” by which he meant that people seek comfort in religion. It suppresses their natural desire to be free, preventing the masses from revolting against those in power. He was wrong, in that religion protects the soul of man from the cruel reality of the human condition, a condition that is immutable, despite the utopian dreams of men like Marx.

Mass media, however, is proving to be something vastly more potent than the drugs with which Marx was personally familiar. Mass media is the fentanyl of the masses that eats at their soul, depriving them of their liberty. Like the man-made narcotic, mass media is highly addictive, causing the addict to crave that which he knows is enslaving him by causing him to distrust his own mind.

Whether by design or by accident, mass media is a form of menticide, a systematic destruction of the conscious mind of the people. Instead of the quiet predictability of familiar routines, the modern mind is a riot of chaos, doubt, and outrage. The natural human desire to live a peaceful life is drowned out by a riot in the head, triggered by the constant stream of insanity from the mass media.

It is reasonable to wonder if such a world can exist for very long. Modern America seems to be shaking itself to bits. All of the ways we measure the health of a society are pointing in the wrong direction. Perhaps like an addict, the ragged and broken end of a society is just the final chapter of a story that started much earlier. The addiction is just a symptom of other pathologies.

Regardless, those who seek to survive it will need to find a way to silence the riot of the modern mind. Ironically, that means going back to where it started and taking a page from the cultural radicals. To quiet the mind, to break free of the narcotic of media menticide, it means you must turn off, tune out, and drop out. The great irony of the modern age is that to escape it, you must take the advice of those who created it.