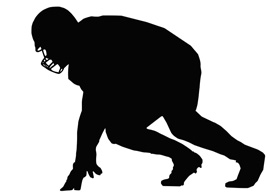 As you may have noticed, football and crime are in the news at the moment.

Some National Football League players are supporting Black Lives Matter—the anti-police, pro-rioter, anti-white, pro-Establishment movement—by boycotting the national anthem before games. The president was widely denounced for tweeting his disapproval of them.

On Monday, however, the FBI released 2016 crime statistics showing that homicides were up an extraordinary 20 percent nationally during the last two years of the Obama administration, when the former president was pushing his BLM agenda. The spike in murders tended to be concentrated in cities where BLM enjoyed its greatest triumphs, such as Baltimore and Chicago.

In other words, the ironically named Black Lives Matter has gotten several thousand additional blacks murdered by other blacks since Ferguson.

But almost nobody on the left or the right is willing to think about the relationship between college rape and college football.

In “The Question of Race in Campus Sexual-Assault Cases” in The Atlantic, Emily Yoffe wrote:

The archetypal image of the campus rapist is a rich, white fraternity athlete…. But… Black men make up only about 6 percent of college undergraduates. They are vastly overrepresented in the cases I’ve tracked.

On many campuses, a large majority of black males are there only because they were given affirmative action or an athletic scholarship. But nobody in the admission or athletic departments wants to take responsibility for the increased number of rapes their decisions are likely to cause.

“The broad national interest in football has served as a unifying influence in an increasingly diverse country.”

American football is beloved by Americans because it is a war game in which teams defend their home turf and methodically invade their opponents’ territory. It makes for an engrossing television spectacle because most people are interested in conquest.

Pro football is, by far, America’s No. 1 spectator sport (172 million tuned in to at least part of this year’s Super Bowl), while college football enjoys an upscale fan base of civic-minded conservatives.

Blacks have come to dominate most positions in football, which reassures white conservatives of the fundamental fairness of American society. It’s difficult to believe the conventional wisdom in the press about how racist America is when the NFL is phenomenally popular despite being 68 percent black.

(But the best quarterbacks are, notwithstanding strident efforts by the media to decrease racial diversity in the pro game, mostly white.)

The broad national interest in football has served as a unifying influence in an increasingly diverse country. A huge fraction of white male conservatives, for example, have played high school football with black teammates.

White spectators like to conceive of their team’s black players as defending the homeland. The ability of black football players to play as a team on Saturday and Sunday inclines whites to be more optimistic about blacks’ potential for pro–social order than might be warranted by what they observe on Monday through Friday. And, indeed, football offers the kind of authoritarian structure under which African-Americans do best.

Moreover, football fandom serves as a way for Americans to reassure themselves of their society’s capacity for military might and lawful cooperation.

Unlike soccer, American football is a violent game, but it’s a game of extremely well-organized violence. The skill with which football teams execute complicated maneuvers has improved throughout my lifetime.

Watching football has long reassured Americans that, if we had to, we could defeat all potential foreign powers on the battlefield. Moreover, the impressive way that football teams obey their coaches as rightful authority figures cheers us that we are unlikely to go to war with ourselves.

These messages are never quite spelled out, but they are implicit in football. Accordingly, the football leagues have adopted nationalistic and military motifs as part of their pageantry.

It’s probably not a coincidence that the NFL is the only one of the North American major leagues not to have any franchises in Canada, which has its own pro football league. The NFL’s American jingoism has likely hurt its appeal abroad, where it lags the NBA, but the NFL more than makes up for it with its overwhelming popularity at home.

In reality, not that many professional football players have served in the military. In the 1970s, Pittsburgh Steeler fullback Rocky Bleier was a rare Vietnam combat veteran in the NFL, while superstar quarterback Roger Staubach had volunteered to serve at a Navy base in Vietnam between Annapolis and the Dallas Cowboys.

After 9/11, Pat Tillman, a patriotic leftist, walked away from a million-dollar-per-year NFL job to join the military. He was killed by friendly fire in Afghanistan. After Tillman’s death, his college teammate Jeremy Staat joined the Marines and served in Iraq.

Several players have gone the opposite route from active duty to the NFL. On Sunday, Capt. Alejandro Villanueva, the son of a Spanish officer and a West Point grad who had earned the Bronze Star serving in the U.S. Army in Afghanistan, was the only Steeler to emerge from the locker room for the national anthem, for which he apologized on Monday.

The media encourages black players to disrespect the national anthem by kneeling during it in order to show support for the (ironically entitled) Black Lives Matter cause. This, of course, calls attention to the worst aspect of African-Americans: their tendency toward disorganized violence. Blacks commit murder at almost eight times the rate of the rest of the population.

Not surprisingly, football has its own problem with off-field violence. When you recruit huge men, two-thirds of them black, and train them for aggressiveness, it’s not surprising they frequently get in trouble. The website NFLarrest.com tracks published data on pros getting arrested.

But it’s worth noting that there is perhaps an order of magnitude more incidents that don’t make the newspapers. NFL teams employ well-connected fixers to make bad news go away:

For every incident that generates a negative headline, Wells said, 10 are handled without the public’s knowledge.

In college football, the fastest way to build a powerhouse is to recruit players of dubious character whom other coaches are leery of. Inevitably, however, this leads to scandals about sexual assaults on coeds, often involving players inviting their teammates to have their way with drunk girls after they’re finished.