Taking Back Our Country From the PC Police 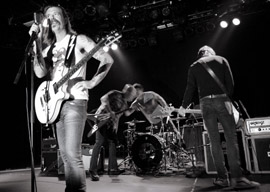 Our interview with Jesse Hughes from Eagles of Death Metal blew up the Internet this week. I”ve appeared on Greg Gutfeld’s show as well as Red Eye, Dana, The Buck Sexton Show, and even Alex Jones” Infowars. Virtually every major news source has written about it and the American press seems to get it right the most. The New York Post called the PC police “cowards” and asked “who wants to listen only to music that has been OK”d by a bunch of spineless liberals and their culture of censorship?” At the other end of the spectrum we have U.K.’s The Guardian publishing a letter to Jesse from an Arab claiming, “All you fucking bigots and your fairytale shit stories are the problem.” I”ve noticed the Muslims have a very condescending tone when it comes to their religion and usually approach the problem with instructions such as “educate yourself” and “get to know a Muslim.” I”d like to return the favor with a homework assignment for them and insist they look up how many Muslims think suicide bombing is “sometimes or often justified.” You can”t really fault the Muslims for pushing tolerance after an attack like this. Lying is a basic tenet of their religion. What makes my skin crawl is the ethnomasochism of the West.

Jesse Hughes had 89 of his fans murdered by Muslims. Nine were shot right in front of him, including one he was screaming at to get out of the way. A woman’s face was blown off inches from where he was standing and human shrapnel shot into his cheek. He has a scar on his face where a woman’s tooth pierced it. She is now dead and he can say whatever the hell he wants. I don”t care if he thinks Jews are lizard people and the terrorists were actors hired by the Amish Mafia. You get a pass when you”ve been through something like that. Fortunately, the conclusions he’s drawn are not even remotely crazy. Steve Sailer once said, “Political correctness is a war on noticing,” and that’s all Jesse did. He never said anything bad about Muslims. He said he suspects these guys had someone on the inside helping them. He came to this conclusion from some pretty irrefutable truths. First, he recognized one of the shooters from earlier in the day. Anyone who’s been on tour knows how regimented venues are about people being in the club early. Ticket sales are how they make their money and they can”t afford to let people drift in and out without paying. They also have to worry about sound ordinances, so bouncers are Nazis when it comes to keeping the back door closed. On the night of the shooting, the staff couldn”t care less about the door. He also noticed it had been propped open during the shooting. Since our interview, I”ve heard that several bouncers didn”t show up that day and none were killed in the attack. I have no doubt we are about to see arrests involving the staff and Jesse will be vindicated.

He doesn”t seem to want to wait, however, and texted me angrily after the shit hit the fan. He claimed he didn”t know I was recording him. His girlfriend tweeted out a similar sentiment claiming I”m a “douche” who tricked Jesse so I could capitalize on his story. It’s not the first time he’s backtracked on the accusation that some staff were involved. In Rolling Stone he apologized and called his own accusations “baseless.” People who haven”t been through anything close to what Hughes has been through fault him for this and are disappointed he didn”t stick to his guns. I”m not. As I said earlier, he gets a pass. Also, I”ve been through this a hundred times and the PC mob is a very disorienting melee. It’s like the first time you accidentally set off your home alarm and have to try to remember the code while a series of screaming sirens in various patterns shatters your eardrums. Hughes is likely backtracking because the entire band and everyone else who relies on them to pay their bills are being punished monetarily for straying from the narrative. Rock en Seine is a festival just outside of Paris and they canceled their gig with Eagles of Death Metal, claiming they “disagreed” with some of his statements. How the hell do you disagree with observations? Do they disagree that he saw Muslims dancing in the street during the attack? Are they prepared to explain how the gunmen got in the venue? What about when these employees are arrested later? Will we get an apology from the promoters of Rock en Seine? Of course not. Europe is so far gone, men who get raped by refugees are worried about the rapist’s feelings.

I went to France right after the Bataclan attack and spoke to Parisians on the street. Virtually everyone I spoke to was totally oblivious to the threat of Islam and treated the whole thing like it was some random train crash. They”ve gone from tolerance and multiculturalism to self-hatred, and today they would literally rather die than offend anyone, especially Muslims.

I”m confident we can avoid that fate. Yesterday college students carried Milo Yiannopoulos to the stage while chanting, “USA! USA! USA!” Concert promoters in Europe cancel gigs in order to satiate politically correct millennials, but things are changing here. Where offended students used to get safe rooms and sympathy, they are now being derided. When they said seeing “Trump” written in chalk on their school made them feel “traumatized,” we had #TheChalkening where students all over the country wrote “Trump” in chalk all over schools. I don”t even think they were necessarily Trump supporters. They”d just had enough of whiny liberals and their culture of fear. We lost France a long time ago. Britain is on its deathbed. But Eagles of Death Metal are an American band and we don”t tolerate terror over here. We”ve let the multicult run the show for seven years and they failed. It’s time to take our country back and the first step is to stop apologizing.