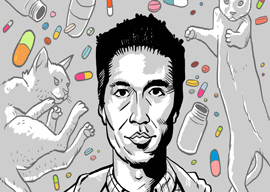 As one fan of Lin’s pointed out, his tendency toward abuse had already been documented extensively in his stalwartly boring books, and no one complained about it”they fawned over him for his honesty. Why is the emotional abuse suddenly an issue? Do the reviewers who love these books actually read them, or do they admire them from afar?

As for the personal correspondence Lin “stole” for the book, he says his publisher made sure everyone was OK with using the documents ahead of time. However artistically lazy and bankrupt it might have been to pass personal correspondence off as fiction, it wasn”t exactly theft. So why do we want these charges to be true so badly that we keep repeating them?

I believe that there are still plenty of reviewers out there who have the sense to realize that writing paragraph after paragraph like this is not the mark of a literary genius:

The next night in a bookstore near Taipei 101, the third-tallest building in the world, an hour after ingesting MDMA, walking aimlessly with held hands, Paul “grimly,” he earnestly felt, asked what Erin was thinking about, and she said she was having paranoid thoughts again, “like maybe it’s not the drugs, maybe we just don”t have anything to talk about anymore.”

It’s as uninventive and soulless as reading a cereal box. But its occasional intellectual trill is enough to worry reviewers, who wonder: what if calling this guy out as vapid exposes me as the dunderhead instead? (And someone can always figure out how to call you a racist just for opening your mouth.) But oh, how we want to call him out for something, anything.

So we”ll jump on any phony rape charge we see, like perverted vultures. Critical response to Lin, from fawning to attacks, has always been based on who we think he is rather than on the quality of his work. First he was a handsome, web-savvy, poor little immigrant, a self-promoting, self-publishing superstar who somehow got noticed by Random House, yaaaay; now he’s an abuser and rapist whose parents have turned out to be wealthy international jet-setters, boooo.

We need to quit scrounging for ad hominems and stand behind the real reason Tao Lin should pipe down: I don”t care who he is, this guy’s writing is nonsense.

And by allowing ill-educated young collegiates to think he’s the pinnacle of available reading material, we”re damaging their development as readers and thinkers. We don”t need to libel him, we don”t need to dig up his exes, we just need to say that contemporary writing can be better than this”that contemporary writing is better than this, and there are plenty of inspired writers telling solid stories that publishers like Random House could pick up instead.

Are you one of those inspired writers? Please send queries for reviews to [email protected]