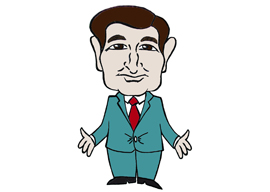 Let us also consider this stunt from Ted Cruz: a bill was introduced into the Senate to strip Americans who fight for ISIS of their citizenship. Former Massachusetts senator Scott Brown, current Cruz stooge and would-be New Hampshire carpetbagger, has already claimed responsibility for the idea, allowing the senator to either claim credit or deflect blame as the situation dictates.

Cruz, the Canadian-born son of a Cuban father who was not naturalized until 2005, knows the obvious: the bill has precisely zero chance of passing and becoming law. It exists merely as bait for rubes who are easily impressed by the fire-eating Tea Party favorite flavor of the week. Not coincidentally, many of these rubes vote early and often in Republican primaries.

There’s only one thing worse than a dimwit who insists upon appearing more educated than he actually is: an Ivy League graduate who insists on coming across as a bumpkin. No less an authority on eggheadedness than Alan Dershowitz described Cruz as “off-the-charts brilliant.”

That Cruz would not know that lumping the embattled Syrian regime in with ISIS in front of the Christians it’s been protecting from Islamist terror for the last 50 years would get him booed offstage defies credulity. That he sacrifices Syrian Christians on the altar of political shibboleths as they face the very real possibility of extinction is downright despicable.