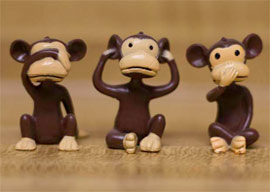 I’ll bet you didn’t realize that “Jingle Bells” is an unabashed celebration of white supremacy and that “Rudolph the Red-Nosed Reindeer” inadvertently celebrates the bullying of a closeted homosexual.

What’s worse, I find your willful ignorance on these issues to be highly problematic.

According to the pelican-faced Kyna Hamill of Boston University:

The legacy of ‘Jingle Bells’ is one where its blackface and racist origins have been subtly and systematically removed from its history….Although ‘One Horse Open Sleigh,’ for most of its singers and listeners, may have eluded its racialized past and taken its place in the seemingly unproblematic romanticization of a normal ‘white’ Christmas, attention to the circumstances of its performance history enables reflection on its problematic role in the construction of blackness and whiteness in the United States.

As far as I can tell, she thinks the song would have been more accurately titled “Slave Bells Ring.” She appears to be arguing that behind every “Jingle Bells” lies Emmett Till’s bloated corpse. Remind me not to buy her a Christmas card.

Over at Slate, Christina Cauterucci and her ill-advised hairdo are waxing wroth about the fact that Santa Claus treats Rudolph—who obviously was intended by his creators to represent a bullied Gay Everyman—like a sweatshop worker in his capitalist Ponzi scheme. Santa is scolded for not stepping in and protecting Rudolph against body-shaming until he realizes he can exploit the little battered gay reindeer’s shiny red nose for profit.

The only problem I see here is the fact that people see problems here.

“The world of The Problematics is a deeply unhappy place where people constantly have 99 problems, all of them imaginary.”

Of course, one expects such types to go after Christmas, because as we all know, Christmas is merely an emblem of rape, colonialism, smallpox, slavery, lynching, foot-binding, transphobia, reindeer-shaming, whiteness, late capitalism, and greenhouse emissions.

What’s psychologically fascinating is that, in the endless quest to be even more ideologically pure than all their allies and comrades combined, they’re also eating their own.

Were you under the impression that the 90s sitcom Sex and the City was a celebration of girls doing girly things and thereby empowering themselves through endless promiscuity, male-bashing, and binge-eating? Yeah, me, too. Unfortunately, a self-described “queer teen” who self-righteously claims to inhabit the “more enlightened pop culture climate of 2017” scolds the show for being “pretty problematic” because it’s filled with dialogue that is “highly unacceptable.”

As a remedy for all these unacceptable problems, the queer-teen author points to a recent Instagram meme called “Woke Charlotte” wherein an enlightened 2017 version of the sitcom’s Charlotte character scolds the original 90s characters for saying things that were flat-out not OK. Some examples of a newer, more-feminist feminist lecturing an older, problematic feminist include Woke Charlotte replying to…

And I don’t enjoy white supremacy, especially when it comes from within my own family. With all due respect, fuck off Bunny.

I am paying a fortune to live in a neighborhood that’s trendy by day and tranny by night.

The correct term is ‘trans’ and trans sex workers deserve respect. After all, they’re not the ones who are gentrifying the neighborhood. Please check your cisgender privilege, Samantha.

I was always under the impression that the Real Housewives reality series appealed almost exclusively to skinny young white gay boys and fat women of all ages and sexual orientations. Like everything else on television today—which is one of the many reasons I don’t own a TV—it slavishly scurries to keep up with progressive pieties that are updating every minute, always struggling to stay at the front of the pack when it comes to being aggressively not-racist, not-sexist, and not-homophobic.

I was wrong. Apparently the show is highly problematic, as is the fact that I didn’t realize this. According to a writer at Mic, the series has a “well-documented past of problematic LGBTQ moments” involving such shocking incidents as some of the ladies jokingly suggesting that a male cast member might be gay and one of the bitchy housewives ironically suggesting that another one of the bitchy housewives—both of them biological females—must have had a dick cut off during reassignment surgery.

In other words, NO MORE JOKES, EVER. These sick, bitter, humorless thought-lampreys who are always finding everything “problematic” are on a suicide mission to take shows that weren’t funny in the first place and eliminate the possibility of anyone ever finding anything funny about them. The only thing remotely funny—and it’s bittersweet at best—is that these prigs are blind to how silly they look.