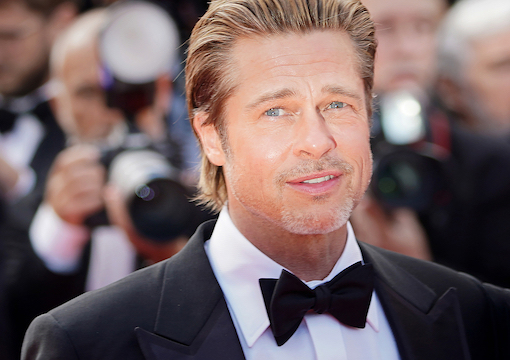 The actor Brad Pitt recently turned up at the Berlin premiere of his latest film wearing a dress and ranting about how everyone is going to die. It is possible he was on drugs, a thing common in the carny trade, but most likely he was doing it to gain some attention and score some piety points. Being white and male is about the worst thing possible according to the new religion, so he is going trans.

He also spent part of an interview with the Financial Times explaining how exhausting it is to be a normal man. He did not use the words “normal man,” of course, as that violates the tenets of the new religion. Instead, he suggested that the traditional male role in society is exhausting for him. He made these remarks while hanging out with his “bros” in Finland while “trying to heal” at an art exhibit.

None of this makes any sense to a normal person, but normal people understand that carny people are not normal. They live different lives because their existence depends upon them getting our attention. That is their purpose in life. They get the attention of the public, even if it means humiliating themselves. In the case of Brad Pitt, it now means wearing a dress and talking like a homosexual.

“No one knows what to do because our politicians were not hired to be competent. They were hired to be entertaining.”

The only reason anyone should care about this is that it offers a bit of insight into the current crisis in the West. Brad Pitt has tried to maintain some dignity in a world where dignity is a liability. He stuck to certain roles that fit his image and lifestyle, and he has tried to embrace getting older. In the end, he had to succumb to the indignities of his trade, because that is what is required of him. He now wears a dress.

We see the same dynamic in the political system. Our politicians have become increasingly ridiculous, because that is how you get noticed. If you want a career in politics, it means finding some way to get the public’s attention. Since accomplishing something important takes time and talent, most people simply find some way to entertain the public, which usually means debasing themselves.

The reason that a simpleton like Liz Truss is the prime minister is her predecessor lacked the scruples to behave himself during Covid. Of course, Boris Johnson was in the job because he played a unique character on stage. He was Winston Churchill played by Mr. Bean in a British sketch comedy. He won the job because he was the most entertaining clown at the moment.

The job of prime minister requires something more than the ability to be amusing, which is why the Brits are now in a political crisis. In their time of need, the Tory Party looked around and found nothing but a collection of colorful extras hired as Boris Johnson’s supporting cast. In easy times they would have put on a good show, but the moment calls for competence, not carnival acts.

The crisis of political competence is not unique to Britain. In fact, the West can rightfully blame the Global American Empire for the clownification of politics. Since the end of the Cold War, American politics have been overrun by carnies. You can date this to when those two grifters from the Ozarks blew into town. Bill Clinton played an amusing character and was rewarded with the top job.

Some would argue that Reagan was the guy most responsible for turning Washington into Hollywood for ugly people. He spent his life as an actor. He got famous as a television pitchman. Those skills honed over years on stage turned out to be extremely useful in politics, which by that point was done on the small screen. His ease in front of the camera made him into a political star.

There are probably some people alive who recall the Nixon-Kennedy debates, which are credited with making television a key player in politics. Nixon easily out-debated Kennedy, but he looked old and haggard, so most people came away liking the handsome and charming Kennedy over Nixon. Ever since, it has been required that politicians look good on television.

Regardless of where one places the blame, the truth is our political system is nothing more than entertainment. As a result, it selects for the sorts of people who are willing to degrade themselves for attention, because attention is the coin of the realm. If you are a ditzy barmaid willing to do anything to get on stage, you can follow in the footsteps of Alexandria Ocasio-Cortez and be in Congress!

This also explains how Joe Biden is president. Just as the implosion of Boris Johnson left the Tories scrambling, the implosion of Hillary Clinton left Washington with the terrifying choice between Donald Trump and Bernie Sanders. Looking around, they found only character actors hired for supporting roles. They were forced to make the empty vessel that is Joe Biden into the star of the show.

This is the nature of democracy. Like all entertainment rackets, it rewards the sorts of things that you do not want in people during a crisis. The last thing anyone wants around them in an emergency is an attention-seeking drama queen, but that is what fills every Western capital now. No one knows what to do because our politicians were not hired to be competent. They were hired to be entertaining.

Look around the political class of the West and find anyone who has had a job in the dreaded private sector. The closest you will find are lawyers, but nine times out of ten they did their legal work in government. The fact is, having worked in the private sector is a liability in politics. It makes one suspect. The other performers naturally distrust anyone who can exist without the roar of the crowd.

They say Mother Nature abhors a vacuum, but we are about to learn that she is not too fond of clowns, either. The West faces the greatest crisis since the start of the Great War over a century ago. Unless someone steps forth to solve the political crisis, we will all learn why prior generations relegated carny folk to the fringes of society. If you let the clowns roam free, you end up with a circus.