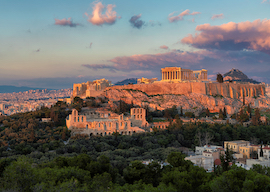 The Acropolis of Athens

Sailing in Homer’s wine-dark Aegean Sea is the best antidote I know to the brouhaha over the “Squad.” And traipsing all over the Acropolis and the marvels of antiquity makes these four publicity-seeking, opportunistic mental dwarfs seem even pettier than they are. Mind you, these petulant females wouldn’t know the difference between Corinthian and Doric any more than they’d know Athenian democracy as opposed to Spartan oligarchy. As my boat sailed away from Athens and headed south toward the Peloponnese, I thought of the achievements of the ancient Greeks, and how now the most powerful country in the world is being held hostage by the machinations of the tiniest of minorities in cahoots with the leftist mainstream media.

Pericles, the charismatic leader most commonly associated with Athenian democracy, cast a giant shadow on the future. No one has approached him: He was an aristocrat, politician, democrat, soldier, imperialist, peacemaker, visionary, educator, private citizen, statesman, strategist, and hero. Yet with his premature death from the plague during the Peloponnesian War, which lasted 27 years, the miracle that he had created 2,500 years ago went the way of all empires. Pericles’ democracy was a model for its time. Women, children, slaves, and foreigners were excluded from citizenship and participation in the democratic process. But nowhere in the ancient world was there such a form of government, and to those modern critics who see ancient Athenian democracy as not meeting their requirements, the ancients would, in return, find it even more incomprehensible calling democratic a government by indirect representation and lacking public accountability by politicians. Hear, hear!

“If the ‘Squad’ had a scintilla of honor they would commit seppuku in unison in front of the Capitol.”

I know, I know, times have changed, but the character people possess has not.For real democracy to work, a body of citizens with a sound understanding of the principles of democracy is needed. In America today, the body of citizens with a sound understanding of democracy is the silent majority of mostly white and Christian men and women who are never evoked or quoted by the media, but go about their business and lives without complaining and claiming to be victims. And although victimhood has become the sine qua non of today’s America, it is a con perpetrated by ignorant but opportunistic politicians who remain in power through the publicity they get from their phony crusades.

But let’s look at Pericles’ time and compare it with the present (and weep). He was annually elected, a public official (one of ten) who never placed himself above the law or above the constitution. He believed in intelligence, reason, restraint, and peace. (The first three qualities totally absent from the “Squad.”) He guided his fellow citizens toward civic virtue and the order and excellence associated with it. (He did not refer to political opponents as “motherf—ers,” à la a certain “Squad” member.) But here comes the most important thing of all where the ancient and modern are concerned: Pericles and Athenian democracy can offer contemporary political leaders a powerful challenge to examine their own actions and goals. Simply promising economic equality has not worked, nor will it ever. What will work is the dignity and autonomy of every individual and the elevation of that individual to full participation in the political process but also to full civic responsibility and community participation.

Brave-sounding words and pronouncements, I agree. But spoken more than 2,500 years ago right underneath the Acropolis by men who believed the unexamined life was not worth living. (Thank you, Socrates.) Watching those desperate men and women vying for votes in the Democratic primaries is a lesson on how not to live one’s life. Shame has always been unbearable in Greek life. Honor was a prerequisite for ancient heroes, both in real life and in mythology. In Homer, bravery is the hallmark of nobles, heroes, and demigods like Achilles. Socrates thought that virtue was indivisible; in other words, you couldn’t be a pious murderer or an honest thief. This demanding ideal called honor entails accepting responsibility even for acts that are not of one’s doing. Excuses do not remove blame. Reading this, I thought of modern life and the last time a criminal or a politician took full responsibility for his or her actions.

Never mind. We Greeks brought a lot to the world, but things have not gone our way since 1453, when Byzantium fell to the hated Turks. Yet after 400 years of oppression by the Muslim hordes, we rose up alone in 1821 and won our independence. When both Italy and Germany attacked us in 1940–41, we resisted and pushed the Italians back into Albania but eventually were beaten by the Wehrmacht’s Panzers. Other European countries like France, the Netherlands, and Belgium surrendered almost without a fight and did not resist when occupied and emerged on VE Day unscathed. Was it worth it for us to lose more than half a million Greeks for honor alone? I’d say yes, having lost many in my family, but then I’m a dinosaur who still believes in honor, duty, and country, but not in victimhood. If the “Squad” had a scintilla of honor they would commit seppuku in unison in front of the Capitol, but honor is an alien word not associated with today’s politics. See you around the Acropolis!