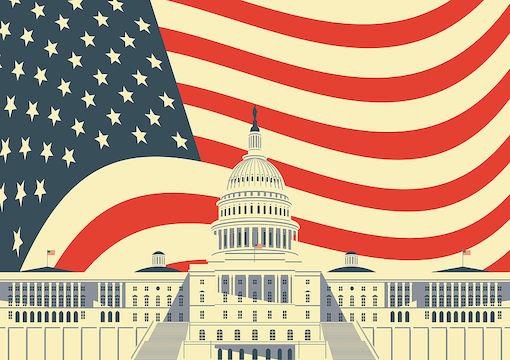 Lost in the tedium and general lack of interest in the impeachment show put on by the Democrats last week is the general weirdness of our ruling class. What we see in politics and in the media is presented as if it is completely normal. No one ever points out the facts or the contradictions with reality. The presenters and their subjects are all super-serious, as if everything they are saying and doing is completely normal.

The reaction to the very peaceful demonstrations by Trump fans last month is a great example of this weird disconnect. We live in an age where everything is monitored by millions of mobile-phone cameras. As a result, everyone got to see hours of amateur video shot during the subdued protests in Washington back in January. Yet the carrying-on by the politicians and media is disconnected from what we saw online.

If you are a left-wing partisan, all of it confirms your belief that Trump is a magical orange Hitler commanding an invisible army of Hitlers. Of course, for these people, everything confirms this belief. They are insane. For normal people, it was just another day of modern politics. The only thing strange this time is it was well-scrubbed white people instead of degenerates causing the ruckus.

“For two days the Democrats put on their case against Trump, which consisted of hysterical sobbing and poorly forged evidence.”

Those who hate Trump were glad he is gone, while the tens of millions who supported Trump got a little boost by seeing their guys raise some hell. Then it was forgotten, until the Cloud People began to carry on like it was the most important event since Pearl Harbor. In fact, Chuck Schumer compared it to Pearl Harbor.

In addition to the crazy rhetoric, the Cloud People then brought in the Army to occupy the city and erected a massive set of barriers between themselves and the other side. This new Green Zone will most likely be permanent, even if it is not guarded by an infantry division. Perhaps the now useless Border Patrol will be reassigned to guard the new Green Zone border.

If that was not enough, members of “the Squad,” a collection of hysterical female House members, decided to stage what amounted to an encounter session on the House floor the week before the impeachment show. They “shared their lived experience” as victims of the angry mob of invisible Hitlers who “stormed the Capitol.” Their stories were made even more poignant by the fact that none of them were there.

This is where it is good to take a moment and think about the people involved in this dramatic reading of fictional events in which they were the stars. One was a woman calling herself Ayanna Pressley, bald as a billiard ball. You see, she is the victim of an undiagnosed disease, probably institutional racism.

The ringleader of this weird key party was everyone’s favorite Puerto Rican barmaid, Alexandria Ocasio-Cortez. She claimed to be hiding under her desk when the angry mob of invisible Hitlers laid siege to the Capitol. The fact that her office is many blocks from the Capitol and there was no mob at her office is not important. In an autoethnography, facts are just more proof that society is a racist patriarchy.

This brings us to the big show. For two days the Democrats put on their case against Trump, which consisted of hysterical sobbing and poorly forged evidence. The brain trust running this show fell for one of the simplest of internet gags. That is the photoshopped tweet, attributing something to someone as a joke. In other words, the people running this do not know how the internet works.

The guy leading this bizarre presentation is Jamie Raskin, a shape-shifting hustler who reminds people of a drug-resistant virus. He started his political career in Massachusetts but fled to Maryland, where he spent 25 years undermining the laws of the state as a legislator. He then slithered into Congress. Of course, he has never had a real job. He is the sort who can give a people a bad reputation.

His team is composed of tax eaters of various sorts, all of whom are now in the House as Democrats. One is Eric Swalwell, who was last seen rolling in the hay with a Chinese spy while he sat on the Permanent Select Committee on Intelligence. There is David Cicilline, gay former mayor of Providence. His father was a famous Mafia lawyer, and his brother was last seen getting his law license back after serving time for extortion.

The whole cast of characters putting on the impeachment show looks like the cast of a poorly written political satire. In a just world, they would have arrived at the Senate in a VW Beetle, made up to look like a giant mouse. After the show, they would go to a children’s birthday party and make balloon animals for the kids. At least they would have done something useful for once in their lives.

This is the salient point of the impeachment show. It is just a show and its purpose is to show us that the carny trash has taken over the system. They control not only the culture through television, movies, and sports entertainment, they now control the political debate. Want to get on TV to make your points? Try wearing a gold lamé codpiece and a flowerpot on your head. Otherwise, get to the back of the room.

This is the natural arc of democracy. Strong societies have standards that draw a clear line between what is and what is not acceptable. Democracy seeks to obliterate those rules, creating an open society. It is not an accident that George Soros calls his operation the Open Society Foundation. The point is to eliminate the barriers that keep people like him from slithering into the halls of power.

The collapse of rules opens the door for the carny trash as well. In a democracy, everyone is the same, so the only way one can differentiate oneself from the mob is to be strange in some new way. The people best at that are the people who are willing to humiliate themselves on stage for a few laughs or some applause. It does not take long before the carny trash takes over and politics becomes a circus.