The Last War for the Neocons 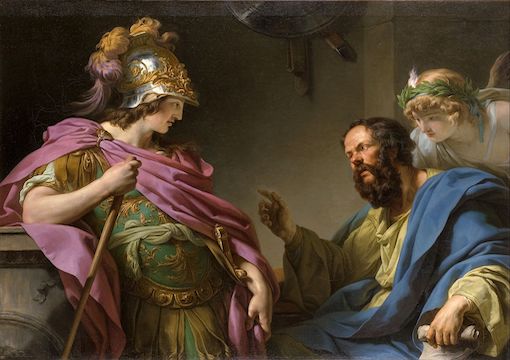 Alcibiades Being Taught by Socrates

The history of Western man is the history of war, and no war looms larger in the West than the Peloponnesian War. Fought in the fifth-century BC between the Delian League, led by Athens, and the Peloponnesian League, led by Sparta, the war has come to define the two natures of the West. One side is the austere, efficient men of war and the other is the creative men of culture and philosophy.

No war in human history has been studied more than the Peloponnesian War, and scholars continue to debate aspects of it to this day. What we know of the conflict comes primarily from Thucydides. He fought on the side of Athens but was ostracized after the Battle of Amphipolis in 422 BC. While his writings make up a good-sized book, the study of Thucydides and the Peloponnesian War can fill a library.

This Athens-Sparta framing turns up often in Western history. The English Civil War, for example, has the austere Roundheads and their New Model Army against the cavalier defenders of the crown. Of course, it can also be framed as the egalitarian forces of democracy, Athens, versus the hierarchical forces of monarchy, Sparta. Modern liberal democrats prefer the latter framing to the former for obvious reasons.

“Thucydides wrote that war is a violent teacher. Maybe this war finally breaks America of its imperial ambitions.”

Similarly, the American Civil War can be framed this way. The North is the side of freedom, democracy, and equality. The South, with their martial virtues and love of rigid hierarchy, are the Spartans in the story. William Tudor claimed that Boston was the Athens of America because of its cultural impact. Another Yankee city, Philadelphia, has laid claim to being the Athens of America as well.

Of course, the two great industrial wars of the 20th century were framed this way by the American side. In both cases, according to legend, the new Athens led the new Delian League to save the West from the Teutonic Spartans. The subsequent Cold War with Russia was also framed this way. The Russians were always cast as efficient and militaristic, while America was the center of art, culture, and commerce. It was beauty versus the ugly efficiency of ideology.

We see the same thing shaping up with the war in Ukraine. The Russians are now talked about as if they are bloodthirsty murder robots. Western pundits speak of them only in terms of their martial ability. You will note that Athens is always cast as the good guys because of democracy. The Spartans are the bad guys, despite the respect for their martial virtues.

While this may seem like nothing more than a fanciful observation, it is at the center of American foreign policy. The architects of Russian policy are Victoria Nuland and Robert Kagan, the son of Donald Kagan. The father was an arch neocon and a former classics professor at Yale University, whose specialty was ancient Greece. He is famous for his four-volume history of the Peloponnesian War.

For the neoconservatives, ancient Athens has always been at the center of their moral philosophy, especially with regards to America’s role in the world. Western history is about the dynamic of Athens and Jerusalem. They see themselves as the latter, animating the former. The short version of their ideology says history leads to the final victory of Athens over Sparta and the completion of America’s mission.

This is not something that can be overstated with regards to the neocons. In his book The Right Side of History: How Reason and Moral Purpose Made the West Great, Ben Shapiro makes the claim that the West is the product of biblical and Aristotelian ethics, Jerusalem and Athens. Christianity is just a skin suit Judaism wore to give Judaic morality to Western man. His people made the West, by combining those two forces from the ancient world.

This is why they are obsessed with the Russians. The Slavic people, in many respects, lie outside the West, much as the Spartans existed on the edge of Greece. The Russians were indispensable in World War II. They lost 8.35 million men driving the Nazis to the edge of Berlin. On the other hand, they were blamed for setting off the Cold War and dividing the West for generations. There is also the long history between Jews and Russians that predates America.

It is not just the neocons with an obsession for the Peloponnesian War. Trump’s foreign-policy advisers were all Thucydideophiles. Stephen Bannon, Michael Anton, and others on the Trump team were big fans of Graham Allison’s book Destined for War: Can America and China Escape Thucydides’s Trap? It is fair to say that even the opponents of the neocons are haunted by that ancient war.

It is why it is good to think about the Peloponnesian War now that we once again have a war in Europe. Athens triggered the war with Sparta by getting involved in the dispute between Corinth and their colony of Corcyra. Corinth was a Spartan ally. Athens also imposed sanctions on Megarian citizens, another Spartan ally. The Athenian ambitions compelled them to confront Sparta, which was happy to remain in its own sphere of influence and let the Athenians dominate theirs.

This behavior is oddly similar to what we see from America with regards to Russia since the end of the Cold War. It has been three decades of pointless provocations, which have finally broken the peace in Europe. The entirety of the neoconservative subculture is now organized around using the war to bring the United States into direct conflict with the Russian Federation. They see this as their chance to bring about the last war.

Interestingly, the Golden Age of Athens preceded the war with Sparta. This came after the defeat of the Persians. This was when Athenian influence grew primarily through the flourishing of trade. After the Spartans finally defeated the Athenians in the Peloponnesian War, there was another period of cultural flowering. In the years following her defeat, Athens gave us Plato and Aristotle.

The point being that the Athens that looms over Western civilization was the product of peace rather than war. Wartime Athens was belligerent, arrogant, and destabilizing to the rest of the region. The great contribution to the West made by the Spartans was in finally defeating her old rival and ending her imperial ambitions. The Spartan defeat of the Athenian empire may have made Western civilization possible.

That is highly debatable, but it is something to consider as the Global American Empire stumbles into what is looking like its Sicilian Expedition. The thirty years of economic and technological flowering after the Cold War have made the American empire belligerent, arrogant, and destabilizing to the rest of the world. To the rest of the world, the modern Athens is becoming something to fear rather than admire.

Athens did not regain herself until it was finally defeated at the Battle of Aegospotami and forced to surrender to Sparta. Perhaps that is what we are about to see with the Global American Empire in Ukraine. Thucydides wrote that war is a violent teacher. Maybe this war finally breaks America of its imperial ambitions. Perhaps then America can go back to being what it aspires to be, the modern Athens.