The Myth of ‘Build Back Better’ 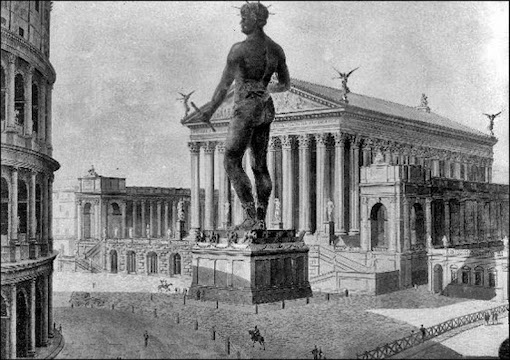 On the night of June 19, a fire broke out in some of the shops near the Circus Maximus in Rome. The fire quickly got out of control and burned for six days, before it was brought under control. Then another fire started and it burned for another three days, destroying two-thirds of Rome. The emperor Nero, after assessing the damage, addressed the people and said, “We will build back better.”

That’s not true, of course. Nero would not have been so ridiculous, for fear the people would revolt. Like our modern tyrants, though, he conveniently had elaborate plans ready just in case things suddenly needed rebuilding. He rebuilt much of the city in the Greek style and built a massive new palace for himself. One of the features of his new palace was a 35-meter statue of himself called Colossus Neronis.

If the phrase “build back better” rings a bell, it should. It has become a strange slogan for the global political class. Joe Biden has a section on his campaign website labeled Build Back Better. In addition to the normal political rhetoric lies the claim that “this is the moment to imagine and build a new American economy for our families and the next generation.” Nero would have agreed.

New Zealand prime minister Jacinda Ardern used the slogan in her successful reelection campaign. “We will build back better from the COVID crisis,” she said during her victory speech. The fact that all of the damage done to New Zealand during the COVID panic was due to her dictatorial polices was not mentioned. Again, Nero would have agreed with her decision on that point.

Of course, both Biden and Ardern were cribbing from Boris Johnson, who has been promising to build back better since he took office. In a major speech last June, he promised to “act fast” and to “build, build, build” in order to tackle the long-term problems in the U.K. economy. He also said he intends to “level” up, which presumably means he intends to take on the COVID boss at the end of the game.

“Perhaps Andrew Cuomo will erect a 35-meter statue of himself in Central Park.”

Even the provincials are getting into the act. Chicago, which is one of America’s most ineptly run cities, wants to build back better. They claim that COVID-19 is racist and targeting blacks more than whites. The Together We Rise initiative promises to build an equitable and just recovery from the racist COVID monster. Chicago makes it easy to believe Nero set those fires that destroyed much of Rome.

The phrase “build back better” was coined in 2015 at the Third U.N. World Conference on Disaster Risk Reduction held on March 14–18, 2015, in Sendai, Japan. The term appeared in the resulting document called “United Nations’ Sendai Framework for Disaster Risk Reduction.” It outlines “seven clear targets and four priorities for action to prevent new and reduce existing disaster risks.”

According to that U.N. document, “The principle of ‘Build Back Better’ is generally understood to use the disaster as a trigger to create more resilient nations and societies than before.” In other words, just as Nero had well-thought-out plans for rebuilding Rome, in case something unfortunate were to ever happen, the global managerial elite is busy planning how to rebuild your community for when it is destroyed.

This offers a bit of an insight into how our new global tyrants view themselves and the people over whom they rule. They look around at the world and think to themselves, “We could have built something much better if we had the chance.” Instead of treasuring the world that makes it possible for them to be an elite, they are resentful of their inheritance, seeing it as an unnecessary burden.

It is this mindset that led them to embrace the COVID panic as if they are new converts to a religion. It was never about public health or keeping people safe. For the ruling class, this was a chance to build back better. Shut it all down so they can create a new order that reflects the tastes of the managerial class. Perhaps Andrew Cuomo will erect a 35-meter statue of himself in Central Park.

This was always at the heart of the climate-change pathology. The initial idea was hatched long before climatology could tell us anything useful about the climate. It was always just an excuse to put the entirety of Western civilization on the table to be renegotiated in accordance with the new priorities of the ruling class. Climate change was build back better before there was build back better.

The irony in all of this is that the people who are endlessly howling about the threat of fascism are embracing what Jeffrey Herf called reactionary modernism. On the one hand, the managerial class embraces modern technology and the promises of science to produce material plenty. On the other hand, they are rejecting Western liberalism in favor of what amounts to a form of informal private rule.

Just as Nero looked out at Rome and longed to remake the city in his image, our modern tyrants long to build back better. Your community is not the product of your ancestors. It is not your inheritance. It is an ugly blight on the canvas on which our rulers dream of drawing an image of themselves. Trivial matters are reimagined as a crisis in order to give them license to light the match.

The difference between Nero and our modern tyrants, of course, is that the people of tomorrow will still remember Nero. His empire-wide building projects, his promotion of the cultural life of the empire, and his excesses will live as long as civilization. No one will remember the mediocrities chanting “build back better” because in the end they will build nothing and leave nothing better than they found it.